President Trump on Thursday questioned why visa protections should be extended to immigrants pouring in from “shithole countries.”

The president reportedly made the remarks during an Oval Office meeting on the immigration bill Thursday, where lawmakers proposed ending the diversity visa lottery program in favor of protections for immigrants from El Salvador, Haiti and African nations.

“Why are we having all these people from shithole countries come here?” the president reportedly stated according to The Washington Post.

The Post’s anonymous sources, who did not attend the meeting, report Trump added he’d prefer “more people from countries like Norway, whose prime minister he met Wednesday.”

Members at the meeting were “alarmed and mystified” by Trump’s comments, according to The New York Times, and “taken aback,” the Post reports.

Meanwhile Trump supporters were unfazed by the remarks.

Obama's State Department told Americans Haiti was unsafe to travel to due to rampant "violent crime, including murder and kidnapping."

How racist of them!

We all know Haiti is NOT a shithole. pic.twitter.com/NYb3nxGPJz

Okay, yes — Trump shouldn't call them "shithole countries." A little respect is in order. They are shithole nations.

I use the phrase “shithole countries” pretty much every time I talk about immigration irl. Greatest prez.

I don’t want people from shithole countries in my country either! Look at what migrants from shitholes have done to Paris! 7 more yrs pic.twitter.com/5JTipVpshb

This is a map of the criminality index from those 2 regions of the world, which are statistically the most violent and dangerous because of how amazing and awesome they are! pic.twitter.com/Dtpy9ykX8p

An estimated 500,000 to 1,000,000 Rwandans were massacred by being hacked to death with machetes and you're telling me that country is NOT a shithole? Or in Tanzania where albinos are raped because many Africans believe that cures AIDS? Please. #Shithole

While not addressing the comments directly, a Trump administration spokesman told The Post the president wants an immigration deal that will benefit the American people, not people from foreign countries.

“The President will only accept an immigration deal that adequately addresses the visa lottery system and chain migration – two programs that hurt our economy and allow terrorists into our country,” said a statement from Principal Deputy White House Press Secretary Raj Shah.

Staffers inside the White House aren't that worried about Trump's "shithole" remark — with some predicting it will actually resonate with his base, not alienate it, much like his attacks on NFL players who kneel during the national anthem did.

In Trump’s defense, Haiti being classified a “shithole country” is no surprise given the Clinton Foundation’s scheme to defraud the American public and the Haitian people since the 2010 earthquake and beyond.

One America News Network commentator Liz Wheeler noted as much when she owned Chelsea Clinton after the former First Daughter used the “shit hole” remarks to attack Trump. 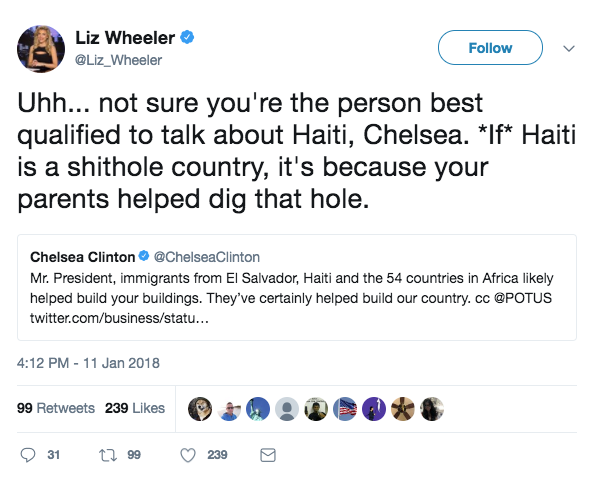