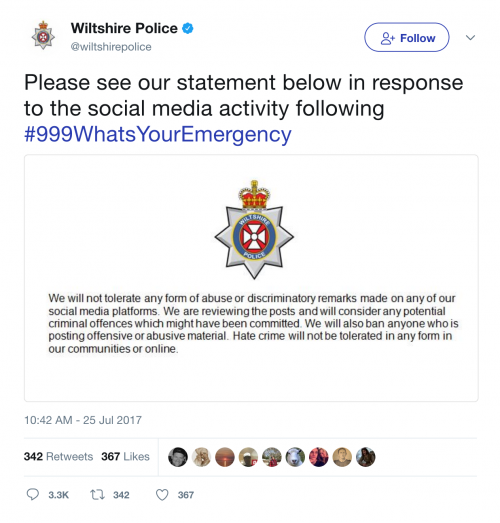 An anonymous Facebook user has relayed a harrowing encounter with UK police in which they claim law enforcement threatened ‘hate crime’ prosecution and unmasking of their identity to their employer if they continued to post ‘Islamophobic’ content.

UPDATE: The Facebook account belonging to The Church of Mogg has since deactivated and the post removed. It is not yet known if this is related to the story below.

The admin of a small fanpage called “The Church of Mogg” – a reference to conservative UK Parliamentarian, Jacob Rees-Mogg – posted an explanation detailing the reasons behind a lengthy absence from social media.

According to the user’s story, they were visited in person by two UK police officers, who advised the user that if they continued to post “Islamophobic” content that was deemed “offensive to the Muslim community,” they could face prosecution under Hate Crime legislation, and should preemptively delete the page to avoid further complications.

The user was troubled by the fact that they had no idea how UK police obtained their identity and address, but after consultation with an attorney, they decided to proceed to post to Facebook as before, despite a follow-up phone call with police in which they repeatedly threatened, “Hatred will not be tolerated.”

Shortly after, police increased their pressure exponentially, placing another phone call to the user, requesting they “attend a ‘Community Resolution Meeting’ at a police station to ‘clear up’ a number of concerns they had regarding the page.”

The user, upon advice from an attorney, declined to comply with the ‘request,’ instead offering to address said concerns in writing, but was informed that if they would not present themself in person, the police would force a meeting at the user’s place of employment, which they identified by name.

“This, ladies and gentlemen, is where I fear they seized the upper hand,” explains the user. “I very much enjoy my job and the salary is more than sufficient to support my lifestyle and nocturnal habits. The idea that my lifestyle could be put at risk for the sake of a Facebook page seemed absurd and, to my eternal shame, I agreed to terms.”

The user deactivated The Church of Mogg page, as well as their own personal account, thus self-purging social media of their unacceptable ‘right wing’ presence.

“The page was closed and the matter closed with it,” the user wrote. “There would be no need for a meeting, no need to potentially alert my employer to my ‘Islamophobic’ tendencies.”

The recounting of these events remained hidden from the public eye until this week, when the user reactivated The Church of Mogg page after discovering that they are soon going to be unemployed, due to reasons unrelated to the aforementioned circumstances.

Now that their livelihood no longer hangs on the whims of the UK speech police, the user has decided to take a stand for free expression amidst the massive chilling effect sweeping the West.

“Then last Thursday I was notified, along with my entire office, that I will shortly be made redundant,” they wrote. “In that moment I realised two things: Firstly, the police no longer held any power over me. I am beyond confident that nothing I have posted is criminal and closed the page only because of my job. That’s gone now, and with it their leverage.”

“Secondly, I realised this isn’t just a Facebook page – this is a place for me and people like me to speak and be heard. If, in fifty years, my grandchildren ask me what happened to freedom of speech, I want to at least tell them I tried, no matter how small my contribution.”

The user’s post has gone viral, even being shared by Breitbart London’s editor-in-chief, Raheem Kassam, who added, “The must read update of the day, straight from 2017 Britain…”

UK law enforcement openly advertise that they are patrolling social media platforms, threatening users with announcements that they are hunting for any expression of ‘wrongthink’ or ‘offensive material’ – while homicidal jihadists stack bodies in UK graveyards, widespread acid attacks are normalized by the BBC, Islamic grooming gangs sexually destroy thousands of young British girls, and up to 25,000 known Islamic radicals roam freely throughout the small island nation. 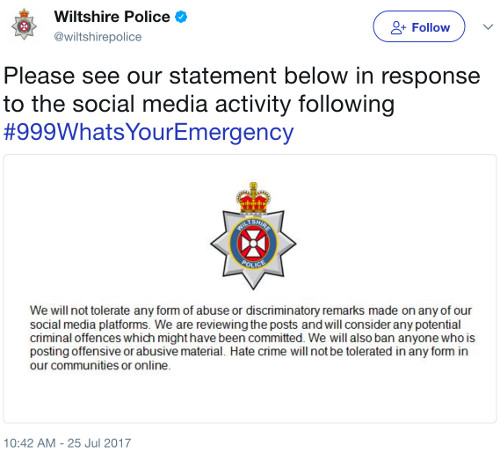 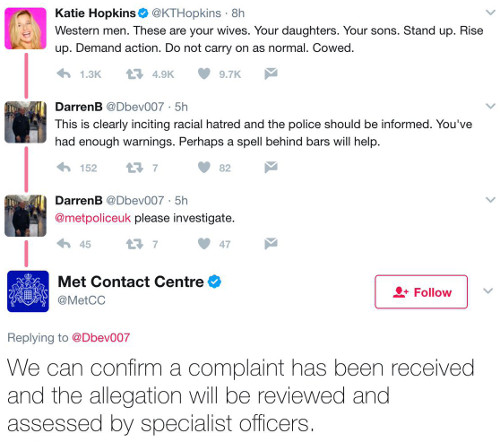 In July, London Mayor Sadiq Khan announced plans to close half of the city’s publicly-accessible police stations – which have already been halved since 2013 and would leave only a quarter formally in operation – as “remaining police buildings will get upgraded IT services while frontline officers will be provided with tablet computers – in an an effort to boost the reporting of crime online,” according to the BBC.