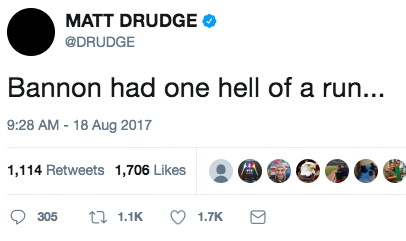 Bannon, a former Breitbart editor, was under vicious attack from many sides in the weeks leading up to his official departure, but the appointment of John Kelly as White House chief of staff may have been his undoing.

“President Trump’s Chief of Staff John Kelly wrapped up a review of the West Wing staff and was expected to can the former Breitbart editor, the voice of the alt-right who has the president’s ear, Drudge reported,” according to the New York Post.

Matt Drudge of the DrudgeReport wrote on Twitter Friday Bannon had “one hell of a run.”

The New York Times reports President Trump had been speaking with senior aides about the best way to dismiss Bannon, with one anonymous administration official claiming Bannon himself had proposed the move and had submitted his resignation more than 10 days ago:

“A person close to Mr. Bannon insisted the parting of ways was his idea, and that he had submitted his resignation to the president on Aug. 7, to be announced at the start of this week, but it was delayed in the wake of the racial unrest in Charlottesville, Va.”

Bannon was credited with being a major force in challenging the establishment and leftist mainstream media, and helped the president deliver on many of his campaign promises.

On Infowars, political operative and former Trump campaign manager Roger Stone warned earlier in the week that Steve Bannon’s days at the White House were numbered.