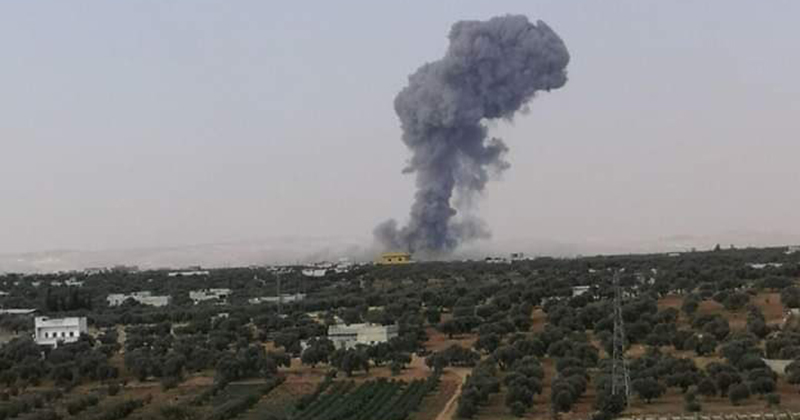 According to breaking reports the United States has conducted major airstrikes on Idlib in northwest Syria, which came just after a fierce bombardment over the past days by Russian jets on the province.

The unconfirmed local reports say a large series of explosions on Saturday rocked the countryside just outside Idlib city in what is believed to have been US coalition missile strikes on the insurgent group Horas al-Din’s headquarters (Al-Qaeda affiliate in Syria).

If confirmed the surprising coalition airstrikes would be hugely significant and an almost unprecedented development, given the White House has for years threatened to attack Syrian government and Russian forces over this very thing — aerial bombardment of Idlib.

Nick Begich breaks down the man-made climate hoax plan to enact austerity measures on the middle and lower class.

According to local sources, eyewitnesses observed up to seven explosions before seeing a massive black plume of smoke rise high on the horizon.

It’s believed that Horas al-Din and Hayat Tahrir al-Sham may have been holding a high level meeting at a headquarters base.

According to Beirut-based Al Masdar News, dozens of jihadists have been reported killed in the attack:

The U.S. military reportedly bombed a group of jihadist rebels near the city of Idlib in northern Syria, local activists reported this afternoon [local time].

According to the reports, the U.S. fired cruise missiles at a base belonging to the Hurras Al-Deen group near the northeastern outskirts of Idlib city.

The reports said that dozens of jihadists, most of them foreigners, were killed during the U.S. military’s attack on the Hurras Al-Deen base near Idlib city.

#Idlib: At least seven seven explosions, targeting the headquarters of al-qaida "Guardians of Religion Organization" were reported a while ago. Report of International Coalition bombings.#Idlib #HTS #AL_qaida #SAA #Syria pic.twitter.com/PXXJ4sVsLX

The US coalition had actually targeted a jihadist base in Idlib province earlier this year, however, Saturday’s airstrikes if confirmed would mark a major escalation in US coalition counter-terror operations in Idlib.