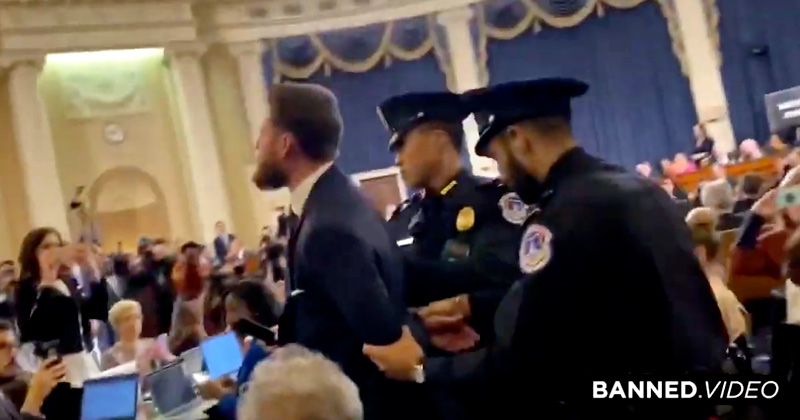 Update #3: Alex Jones is live with the reporter who got arrested:

Update #2: Owen Shroyer gives his first statement after being arrested:

Update: Owen Shroyer has been released from jail. Tune in for an interview with Shroyer and for more details around Noon Central.

Reporter and radio host Owen Shroyer was arrested after he confronted Rep. Jerry Nadler (D-NY) and called the ongoing impeachment hearings a scam.

Shroyer, who hosts The War Room on weekdays, was arrested on Monday morning during a House Judiciary Committee hearing headed by Nadler, who said the House could vote on articles of impeachment against President Trump this week.

“Jerry Nadler and the Democrat Party are committing treason against this country, and you can kick me out, but he’s the one committing crimes! You are, Jerry Nadler!” Shroyer yelled. “…We’re not going to sit here and watch you run an impeachment scam and remove our vote!”

Here’s the arrest below:

The arrest highlights a double standard in Washington, D.C., in which establishment-approved activists are allowed to confront congressmen in their faces, but a reporter like Shroyer is arrested for protesting a House representative from a distance.

Interestingly, Nadler is battling for media attention on the same day the long-awaited Inspector General report is expected to be released, which examined the FBI’s actions in the early stages of Operation Crossfire Hurricane.

This story is developing.

One man vs the fake system: