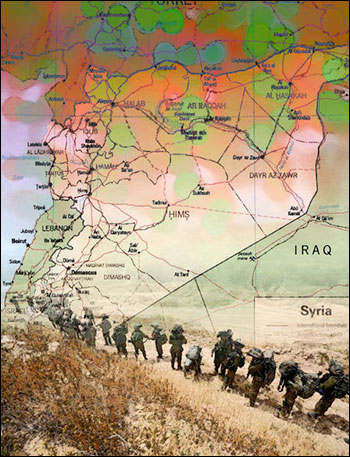 Two reports in recent days have suggested that establishment-backed Syrian “rebel” forces trained and led by American, Israeli, and Jordanian commanders entered Syria and began pushing toward the capital city of Damascus this month. According to sources cited in the international reports, the foreign-led opposition fighters began the latest offensive in mid-August, prior to the reported chemical-weapon attack in the Ghouta region of Syria widely said to have claimed hundreds of civilian lives so far.

Sources seeking to blame the Bashar al-Assad regime for the August 21 massacre have seized on the reports to claim that the dictator, despite repeated vows not to use weapons of mass destruction absent a foreign invasion, resorted to such desperate measures to beat back the latest offensive. Those suggesting the attack was a so-called “false-flag operation” perpetrated by opposition fighters to blame on the regime, meanwhile, have pointed to the news as yet another indicator that the rebels were indeed responsible for deploying the chemical weapons.

According to a report dated August 21 by DEBKAfile, an Israeli intelligence and analysis service, the first contingent of 250 foreign-trained “rebel” fighters entered Syria from Jordan on August 17 under foreign command. The opposition fighters were trained in “special operations tactics” by U.S. and Jordanian instructors and armed with Russian-made weapons supplied by the Obama administration and the Islamist rulers of Saudi Arabia, the report continued. “They are fighting under U.S. and Jordanian commanders based in the Hashemite Kingdom,” DEBKAfile reported referring to Jordan, adding that additional rebel fighters were standing by ready to be deployed.

“According to our military sources, the rebel units are advancing at speed along the Syrian-Israeli border. They have forced the Syrian brigades posted there into retreating from positions inside a strip of 1-25 kilometers from the border, and captured the villages of Raihaniya, Breiqa and Beer Ajam,” the Israeli service reported, saying that the rebels were trying to create a “buffer zone” inside Syrian territory. “This Jordan-based rebel offensive was launched shortly after Gen. Martin Dempsey, Chairman of the Joint U.S. Chiefs of Staff, visited U.S. forces in Jordan and inaugurated the underground U.S. war room near [the Jordanian capital] Amman for commanding the operation in Syria.”

The other major report about the foreign-run rebel operation, published on August 22 by Le Figaro, a leading French newspaper, also cited “military sources” reporting that two groups of guerilla fighters trained and led by the U.S., Israeli, and Jordanian governments, crossed the border from Jordan into Syria. According to the article, the first 300 rebels crossed on August 17 in the Deraa region, with the second contingent following two days later. Hundreds of fighters from the so-called “Free Syrian Army,” trained and supervised by the CIA and other foreign intelligence services, are reportedly involved in the scheme, the paper reported. The FSA is one of the many “rebel” forces operating in Syria — more than a few of which have openly declared their allegiance to al Qaeda and other Islamic terror groups.

Turkey-based representative Khalid Hodja, speaking for an umbrella organization composed of some of the myriad rebel factions operating in Syria and known as the “Syrian National Coalition for Opposition and Revolutionary Forces” (SNC), promptly denied the two reports, claiming they were designed to raise suspicion about advances made by opposition forces. “The news report says the U.S. and Israel formed special groups made up of volunteers to prevent Syrian radical groups from having control over sophisticated weapons. This claim has no logical consistency,” he was quoted as saying by World Bulletin. “The mentioned areas are under the control of the Free Syrian Army, Syrian Islamic Front and Syrian Islamic Liberation Front. Such operations claimed by the newspaper are out of the question.”

According to the Istanbul-based news service, Hodja blasted what he called a “show of cheap heroism” by the West. “These claims aim to spread the idea that the West is the savior of Syrian people,” the SNC representative was quoted as saying, adding that cooperation with Israeli authorities by Muslim rebel fighters was out of the question. “If the West was sincere, it would allow the arming of the opposition,” he added.

Of course, as The New American and countless other media outlets have documented for well over a year, Western governments and Sunni Arab despots have been arming, funding, and training the opposition. The U.S. government has actually been supporting the opposition with millions of taxpayer dollars since long before open conflict erupted in Syria, according to official documents released by WikiLeaks.

As The New American has also been reporting for a year, the Obama administration set up camp in Jordan close to the Syrian border to train rebel fighters in the use of advanced military weapons and tactics. U.S. personnel are also in Turkey engaged in similar operations. Meanwhile, there are still hundreds of American troops all along Syria’s borders, as well as Patriot missiles, fighter jets, and other military equipment. With the latest allegations about chemical weapons, the usual chorus of interventionists has become increasingly vocal in demanding that Obama launch a full-blown military assault on Syria.

Suggesting CIA personnel were on the ground in Syria working alongside rebel forces, Le Figaro claimed that the operation may have been among the reasons for Assad’s alleged deployment of chemical weapons last week. However, as The New American reported, numerous independent experts and even foreign governments have expressed skepticism over claims that the regime was responsible for the attack — especially considering the fact that United Nations inspectors recently arrived in Syria. For now, what really happened remains unclear, but rebels have been caught perpetrating atrocities and blaming them on the regime on more than a few occasions.

There has not yet been any official confirmation by the U.S., Israeli, or Jordanian governments about the reported incursion by foreign-led fighters into Syria. Still, the two reports promptly made headlines around the world, with various governments and analysts citing the allegations to support widely divergent views about what happened on August 21 outside of Damascus.

Western governments have argued that “evidence” points to the Assad regime being responsible for the attack, with U.S. officials cited in news reports even claiming recently that they were almost certain the Syrian dictatorship was behind the attack. An unnamed “senior Obama administration official” was quoted saying that, “based on the reported number of victims, reported symptoms of those who were killed or injured, witness accounts and other facts gathered by open sources, the U.S. intelligence community, and international partners, there is very little doubt at this point that a chemical weapon was used by the Syrian regime against civilians in this incident.”

Separately, top officials have indicated publicly that American forces are ready to intervene in Syria if Obama gives the order — apparently offering further evidence that the administration is under the mistaken belief that it can start a war without permission from Congress, which is required under the U.S. Constitution. “The Defense Department has a responsibility to provide the president with options for all contingencies,” said U.S. Defense Secretary Chuck Hagel. “That requires positioning our forces, positioning our assets to be able to carry out different options, whatever option the president may choose.”

On the other side, more than a few experts and multiple governments, including authorities from Russia, have suggested that the chemical-weapons attack may have been a “false flag” carried out by rebel forces as UN inspectors were arriving in the country — presumably to provide a justification for overt foreign intervention in the conflict by Western and Sunni powers seeking regime change. “All of this really looks like an attempt, at any cost, to create a reason to produce demands for the U.N. Security Council to side with the regime’s opponents and undermine the chances of convening the Geneva conference,” declared Russian Foreign Ministry spokesman Alexander Lukashevi in a widely quoted statement. Officials from the Communist dictatorship ruling mainland China expressed similar concerns.

While the two most recent reports about foreign-led “rebels” entering Syria have not been officially confirmed, the news, if true, should hardly be surprising to anyone following the conflict closely. Despite the well-documented fact that the “rebels” are almost exclusively foreign-backed jihadists seeking to overthrow Assad’s secular dictatorship — the most effective opposition force even officially became a branch of al-Qaeda in April — the “regime change” effort has been nurtured by Western powers and Sunni despots for years. Regardless of the facts, it appears to analysts as though a wider war is fast approaching.

Alex Newman, a foreign correspondent for The New American, is normally based in Europe. He can be reached at [email protected].