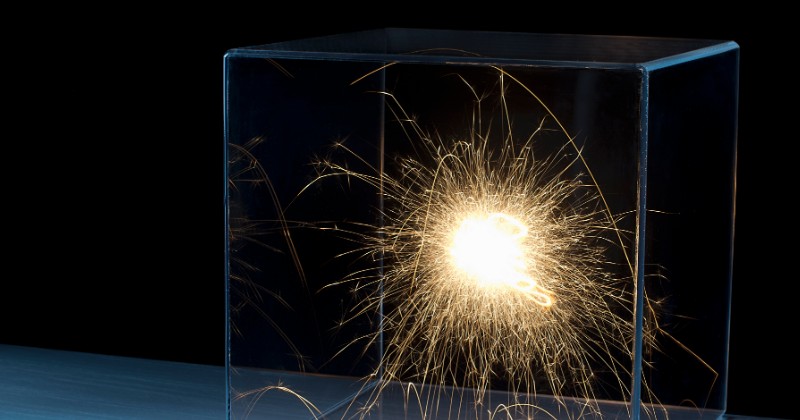 Researchers have achieved the seemingly impossible by producing electricity out of thin air. The remarkable system uses an incredibly thin film of protein nano-wires and a little bit of air, and voila, voltage!

Decades ago, scientists discovered an unusual microbe, G. sulfurreducens, which can not only produce magnetite without oxygen, but it can also make bacterial nano-wires that conduct electricity. After years of research and development, the Air-gen was born.

“We are literally making electricity out of thin air,” says electrical engineer Jun Yao from the University of Massachusetts Amherst. “The Air-gen generates clean energy 24/7.”

The system is quite straightforward and consists of a thin film of protein nanowire just seven micrometers (sometimes known as a microns) thick which is positioned between two electrodes and exposed to the air. For reference, a human hair is roughly 75 microns across, depending on the person.

This nanowire film absorbs water vapor present in the atmosphere, thus creating a small electrical charge through the diffusion of protons in the material.

“I found that exposure to atmospheric humidity was essential and that protein nanowires adsorbed water, producing a voltage gradient across the device,” Yao said.

Similar experiments have been conducted previously using nano materials like graphene, but they only produced intermittent, short bursts of electricity, rather than a “continuous voltage output” like the Air Gen system.

Air-Gen reportedly produces a sustained voltage of 0.5 volts at 17 micro amperes per square centimeter; in other words, you’d need multiple Air-Gen devices linked together to charge your smartphone, so don’t throw out those solar panels just yet.

The system produces no waste and could (theoretically at least) work in places like the Sahara Desert which is why the team are looking to scale up to industrial-sized systems as soon as possible.

One issue is the limited amount of protein nanowire that can currently be produced by G. sulfurreducens, however, they may already be a novel solution: get genetically engineered E. coli to mass produce the nanowire.

“We turned E. coli into a protein nanowire factory,” microbiologist Derek Lovley, who first identified Geobacter microbes like G. sulfurreducens back in the 1980s, said.

“With this new scalable process, protein nanowire supply will no longer be a bottleneck in developing these applications.”