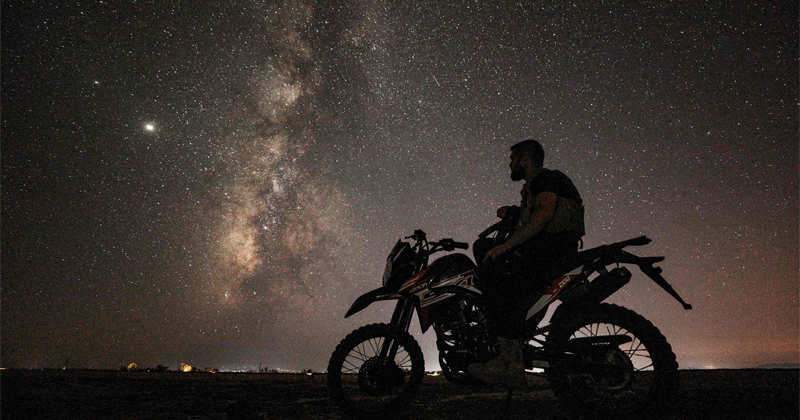 Using known distances of 50 galaxies from Earth to refine calculations in Hubble’s constant, a research team led by a University of Oregon astronomer estimates the age of the universe at 12.6 billion years.

Approaches to date the Big Bang, which gave birth to the universe, rely on mathematics and computational modeling, using distance estimates of the oldest stars, the behavior of galaxies and the rate of the universe’s expansion. The idea is to compute how long it would take all objects to return to the beginning.

A key calculation for dating is the Hubble’s constant, named after Edwin Hubble who first calculated the universe’s expansion rate in 1929. Another recent technique uses observations of leftover radiation from the Big Bang. It maps bumps and wiggles in spacetime — the cosmic microwave background, or CMB — and reflects conditions in the early universe as set by Hubble’s constant.

However, the methods reach different conclusions, said James Schombert, a professor of physics at the UO. In a paper published July 17 in the Astronomical Journal, he and colleagues unveil a new approach that recalibrates a distance-measuring tool known as the baryonic Tully-Fisher relation independently of Hubble’s constant.

“The distance scale problem, as it is known, is incredibly difficult because the distances to galaxies are vast and the signposts for their distances are faint and hard to calibrate,” Schombert said.

Schombert’s team recalculated the Tully-Fisher approach, using accurately defined distances in a linear computation of the 50 galaxies as guides for measuring the distances of 95 other galaxies. The universe, he noted, is ruled by a series of mathematical patterns expressed in equations. The new approach more accurately accounts for the mass and rotational curves of galaxies to turn those equations into numbers like age and expansion rate.

His team’s approach determines the Hubble’s constant — the universe’s expansion rate — at 75.1 kilometers per second per megaparsec, give or take 2.3. A megaparsec, a common unit of space-related measurements, is equal to one million parsecs. A parsec is about 3.3 light years.

All Hubble’s constant values lower than 70, his team wrote, can be ruled out with 95 percent degree of confidence.

Traditionally used measuring techniques over the past 50 years, Schombert said, have set the value at 75, but CMB computes a rate of 67. The CMB technique, while using different assumptions and computer simulations, should still arrive at the same estimate, he said.

“The tension in the field occurs from the fact that it does not,” Schombert said. “This difference is well outside the observational errors and produced a great deal of friction in the cosmological community.”

Calculations drawn from observations of NASA’s Wilkinson Microwave Anisotropy Probe in 2013 put the age of the universe at 13.77 billion years, which, for the moment, represents the standard model of Big Bang cosmology. The differing Hubble’s constant values from the various techniques generally estimate the universe’s age at between 12 billion and 14.5 billion years.

The new study, based in part on observations made with the Spitzer Space Telescope, adds a new element to how calculations to reach Hubble’s constant can be set, by introducing a purely empirical method, using direct observations, to determine the distance to galaxies, Schombert said.

“Our resulting value is on the high side of the different schools of cosmology, signaling that our understanding of the physics of the universe is incomplete with the hope of new physics in the future,” he said.