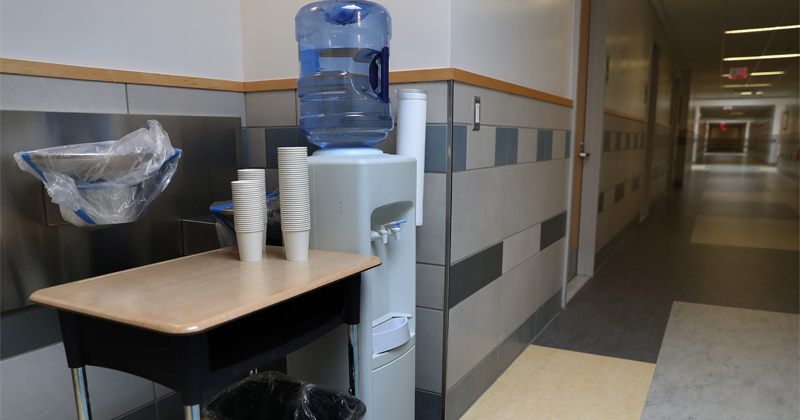 While restaurants, gyms, schools, and other buildings are closed indefinitely to prevent the spread of COVID-19, the water left sitting in pipes could change in quality.

It’s possible that water left sitting for long periods of time could contain excessive amounts of heavy metals and pathogens concentrated in pipes nationwide, say researchers who have begun a field study on the impact of a pandemic shutdown on buildings.

Stagnant water wouldn’t only be a problem for recently closed-down buildings. Water could have been bad for months or years in old hospital buildings that cities are reopening to accommodate a potential influx of COVID-19 patients.

“We don’t design buildings to be shut down for months. This study focuses on the consequences and could help building owners make sure that their buildings are safe and operational when occupants return,” says Andrew Whelton, associate professor of civil engineering and environmental and ecological engineering at Purdue University.

When the Water Comes Back

The researchers began their study upon receiving funding from the National Science Foundation’s Rapid Response Research (RAPID) program. The study involves monitoring water quality in buildings both during a period of extended vacancy and when occupants have returned.

This field study is part of a national effort to advise public health officials, building owners, and water utilities on how to safely recommission buildings with low or no occupancy due to the pandemic.

Whelton and other researchers across the US have begun drafting recommendations compiled by this effort in a paper pending publication. Collaborating with Purdue in this effort are experts from leading plumbing safety scientists and engineers from Virginia Tech, Legionella Risk Management Inc., Arizona State University, the University of Memphis, the University of Iowa, Northeastern University, and Polytechnique Montréal in Canada.

The recommendations are based on implications from other studies of water stagnation in large buildings. Whelton’s team also worked with the American Water Works Association to publish a set of building recommission guidelines and provided guidance to a pandemic response in Detroit as the city worked to restore water service to thousands of households that had been shut off due to inability to pay.

But since no study has taken place on widespread, long-term building closures, knowledge gaps remain on how to best maintain stable water quality during a shutdown. The field study led by Whelton’s team would be a start to filling these gaps.

“We’re not going to have all the science done at the end of this study. But part of what we’re trying to do is put energy toward helping others develop guidelines so that they can at least go in and start recovering their buildings,” Whelton says.

Stagnant Water and When to Flush

Whelton’s team has previously conducted studies on school buildings shut down for the summer and large office buildings, finding that water quality changes over time. In 2019, his team was called into California after the Camp Fire and advised health officials and the community on returning their buildings to safe use. Published papers on these studies are forthcoming.

Typically, buildings can prevent stagnation through regular water use. This brings in new water with disinfectant. But extended building shutdowns will require different solutions, the researchers say.

“As we come back to work after social distancing, even complete building flushing might not be successful in drawing in fresh water.”

For this field study, Whelton’s team is collecting samples at sinks and water fountains in three buildings—tracking temperature, oxygen, heavy metals such as lead and copper, and how microbial communities in pipes change over time.

“When you use water, you’re bringing in chlorine, nitrogen, phosphorus, and a small amount of carbon. Bacteria sitting on the walls of pipes store up those nutrients for later use. But with months-long stagnation, there isn’t going to be any oxygen, new nitrogen, or phosphorus,” Proctor says.

“So the bacteria that can compete under normal delivery of nutrients might not be able to compete anymore. For example, bacteria that do really well when there’s no oxygen might outcompete those that need oxygen.”

The team also is tracking a pathogen called Legionella pnuemophila, which is known to cause a bacterial form of pneumonia. Some hospital buildings already have plans in place to flush out stagnant water that could carry this pathogen, but more studies on stagnant water could inform how frequently and how long they should flush.

“It’s also important to note that not all bacterial growth is pathogenic. That’s why we’re going to look at not only the numbers of bacteria, but also the types of bacteria that are showing up,” Proctor says.

In addition to observing water left sitting still in buildings, the team will study how stagnation affects water softeners and water heaters. In the lab, the researchers will let the water sit still for long periods of time, watching for chemical and microbiological changes.

“There isn’t really any evidence on what prolonged stagnation does to these devices,” Whelton says.

The researchers are bringing together a network of organizations to be ready to act upon the study’s findings when they are available. The American Society of Plumbing Engineers and the International Association of Plumbing and Mechanical Officials are collaborating with Whelton’s team on this study.

Additional guidance on building plumbing during the COVID-19 pandemic are available via Purdue’s Center for Plumbing Safety.

Vaccines, for Bill Gates, are a strategic philanthropy that feed his many vaccine-related businesses (including Microsoft’s ambition to control a global vaccination ID enterprise) while giving him dictatorial control of global health policy.