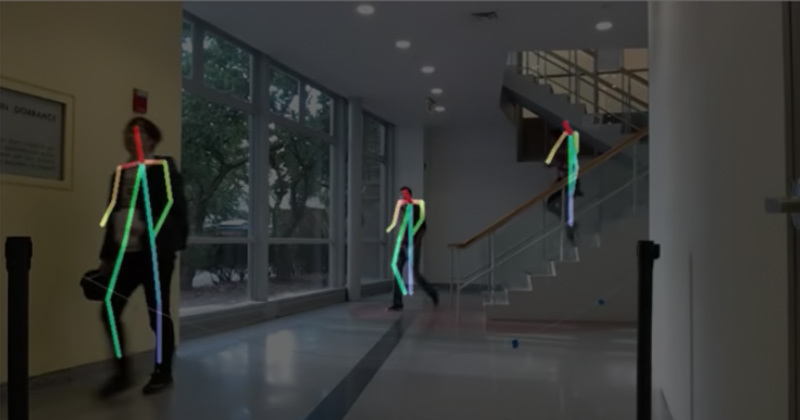 Researchers at the Massachusetts Institute of Technology (MIT) are using WiFi and artificial intelligence (AI) to “see through walls.”

A team from the university’s Computer Science and Artificial Intelligence Laboratory, led by Professor Dina Katabi, has found a way to sense a person’s location, even while in another room, by utilizing wireless signals in their environment.

According to MIT News, the project, known as “RF-Pose,” relies on AI “to teach wireless devices to sense people’s postures and movement.”

“The researchers use a neural network to analyze radio signals that bounce off people’s bodies, and can then create a dynamic stick figure that walks, stops, sits, and moves its limbs as the person performs those actions,” MIT News writes.

While the system may not technically be seeing through walls, Mingmin Zhao, a PHD student and lead author on the RF-Pose research paper, notes the project’s vast potential.

“By using this combination of visual data and AI to see through walls, we can enable better scene understanding and smarter environments to live safer, more productive lives,” Zhao said.

Aside from sensing the movement of people, RF-Pose has also shown the ability to identify individuals “83 percent of the time out of a line-up of 100.”

“This ability could be particularly useful for the application of search-and-rescue operations, when it may be helpful to know the identity of specific people,” MIT News adds.

“Let’s say the police want to use such a device to see behind a wall,” Katabi said. “It’s very important to know if somebody is standing in a position that indicates they are holding a weapon, for example. All of that you can’t do with just a blob.”

Questioned about the potential for privacy invasions, Katabi stated that safeguards have been implemented to protect against specific types of misuse.

“We have developed mechanisms to block the use of the technology, and it anonymizes and encrypts the data,” Katabi said. “And then there is a role of policy that protects the user and doesn’t stifle innovation.”

The team also plans to add a “consent mechanism” which would stop the system from operating without a specific cue from the device’s owner.

Future updates to RF-Pose will include making the current 2-D stick figures 3-D as well.