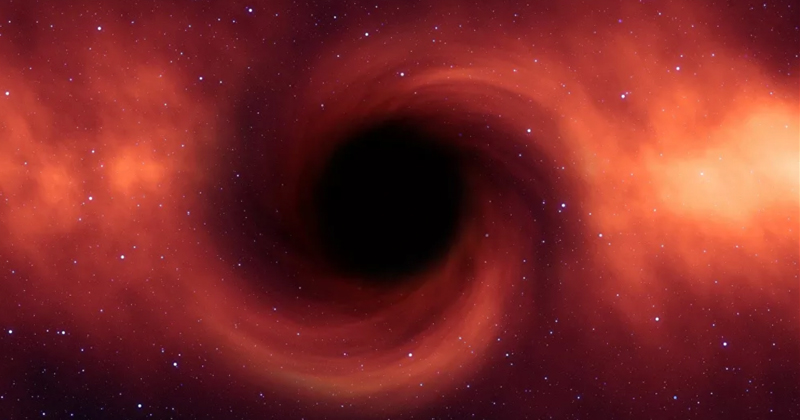 In at least one tidal disruption event, researchers have paid attention to previously unseen double peaks that only briefly popped up for telescopes to see before fading, and it appears the light formations account for an iconic accretion disc – a structure formed by diffuse material in orbital motion.

Researchers might know perfectly well what a so-called tidal disruption – or stellar collapse – is, but it has hitherto been hard to come to grips with this devouring event and find evidence (if any) of X-ray emissions that can establish the presence of an accretion disc, typically formed by diffuse material around a massive star.

However, now, using optical ultraviolet observations of a tidal disruption event, astronomers have managed to pin down the alternating light, which is expected for a rotating accretion disc, as follows from a study due to be published in The Astrophysical Journal.

“… For most TDEs, we don’t see X-rays – they mostly shine in the ultraviolet and optical wavelengths – so it was suggested that, instead of a disc, we’re seeing emissions from the collision of stellar debris streams”, explained one member of the research group, astronomer Tiara Hung of the University of California Santa Cruz.

According to her colleague from the same university, astrophysicist Enrico Ramirez-Ruiz, the recent study is the first solid proof that accretion discs form in these events, irrespective of whether or not we see X-rays.

In late 2018, the astronomers first spotted a unique flare indicating that a supermassive black hole therein was shredding a star, and the researchers analysed multiple wavelengths as the light evolved and grew in size, in a tidal disruption event named AT 2018hyz at the time.

Later, they managed to conclude that a giant black hole exceeding the mass of the Sun by several million times had disrupted the star, leaving a curious thing visible – a double peak in the so-called Balmer emission, generated when electrons in hydrogen atoms transit to a lower energy level.

“What stood out was the hydrogen line – the emission from hydrogen gas – which had a double-peaked profile that was unlike any other TDE we’d seen”, said astrophysicist Ryan Foley of the UCSC, explaining that the double peak in an active galactic nucleus is largely taken as evidence of an accretion disc.

Waves of light that are emitted from something moving towards us tend to be shorter on the blue side of the spectrum, or blueshifted. Yet, light waves from a shrinking object are lengthened, or redshifted. The evidence of both of these shifts comes in handy not merely in determining rotation as such, but the velocity of this rotation.

“Our simulations show that what we observe is very sensitive to the inclination. There is a preferred orientation to see these double-peak features, and a different orientation to see X-ray emissions”, according to Enrico Ramirez-Ruiz, who in 2018 co-authored a paper presenting a unified model for tidal disruption events.

The team moved on to make further multi-wavelength observations, likening them to other TDEs, and finally arrived at conclusions that the accretion disc was made up of around five percent of the star’s initial mass and that it formed quickly, within just one month. A similar conclusion was, incidentally, reached by an international team of researchers led by astronomer Phil Short of the University of Edinburgh in Scotland.

In a pre-print arXiv paper, Short and his team note that “AT 2018hyz is the first TDE in which clear, double-peaked emission lines have been observed and provides strong observational evidence that accretion discs form in at least some TDEs and are a significant source of the observed luminosity”.