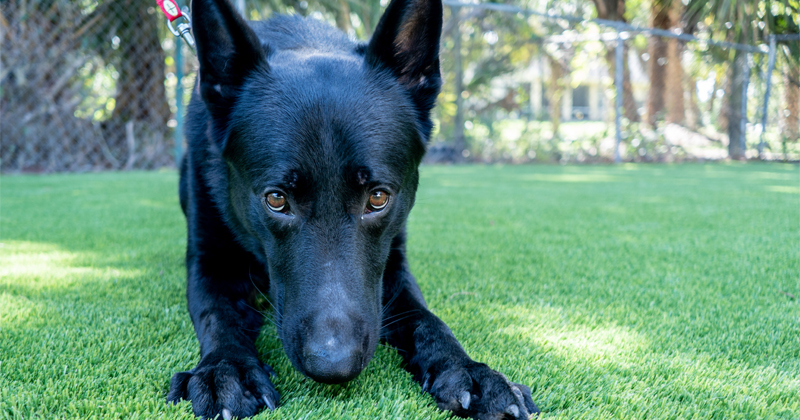 “Silicone monitoring devices are still relatively new, but they represent an inexpensive and effective way to measure exposure to the chemicals we encounter in daily life – from pesticides to flame retardants,” says Catherine Wise, Ph.D. candidate at NC State and lead author of a paper describing the work. “And we know that many human diseases caused by environmental exposure are similar clinically and biologically to those found in dogs.”

Wise and researchers from NC State and Duke recruited 30 dogs and their owners to wear silicone monitors for a five-day period in July 2018. Humans wore wristbands, while the dogs wore tags on their collars.

The researchers analyzed the wristbands and tags for exposures to chemicals within three classes of environmental toxicants that are often found in human blood and urine: pesticides, flame retardants, and phthalates, which are found in plastic food packaging and personal care products. They found high correlations between exposure levels for owners and their pets. Urinalysis also revealed the presence of organophosphate esters (found in some flame retardants) in both owners and dogs.

“What was remarkable about these results were the similar patterns of exposure between people and their pets,” says Heather Stapleton, Ronie-Richelle Garcia-Johnson Distinguished Professor, director of the Duke Environmental Analysis Laboratory at the Nicholas School and co-author of the research. “It’s quite clear that the home environment contributes strongly to our daily exposure to chemical contaminants.”

However, while dogs and humans may share similar exposures, the health effects do not follow similar timelines – a fact that could aid researchers in teasing out relationships between chemical exposure and human health. “Dogs are special when it comes to linking exposures and disease outcomes because effects that may take decades to show up in humans can occur in one to two years in a dog,” Wise says.

“Humans spend incredible amounts of time with their dogs – that’s especially true right now,” says Matthew Breen, Oscar J. Fletcher Distinguished Professor of Comparative Oncology Genetics at NC State and corresponding author of the paper. “If we develop ways to correlate dog disease with their exposures over time, it may give human-health professionals the opportunity to mitigate these exposures for both species. Dogs are a powerful biological sentinel species for human disease.”