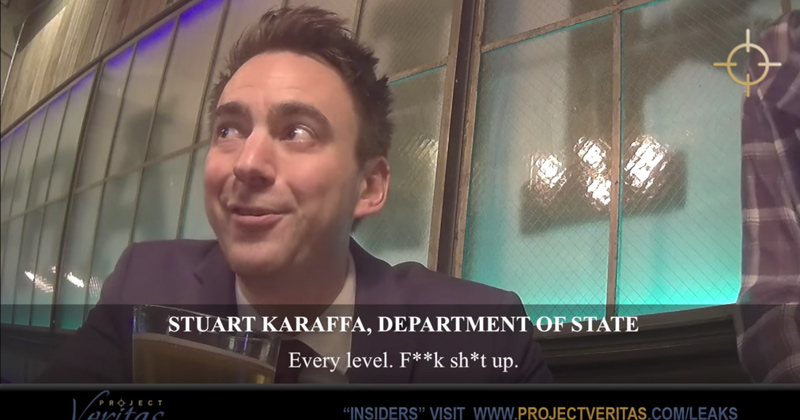 An anti-Trump operative employed by the State Department admits he “resists” the Trump administration while he’s at work, the latest undercover video from Project Veritas shows.

In the exposé released Tuesday, State Department employee Stuart Karaffa is caught on hidden camera saying he carries out work for the Metro DC Democratic Socialists of America (DSA) while on the clock.

“…I’m careful about it. I don’t leave a paper trail, like I leave emails, and like any press s**t that comes up I leave that until after 5:30. But as soon as 5:31 hits, got my like draft messages ready to send out,” Karaffa tells a Project Veritas undercover journalist.

Karaffa also confesses in the video that he carries out tasks such as looking at news for the DSA during work hours, meaning American taxpayers are footing the bill for his extracurricular political activities.

“You could put two and two together probably. With like web traffic…. So with web traffic, I mean I could make the case before a court of law that- I’m going to the Virginia sort of, campaign finance website- that I’m just interested in what people are doing politically,” Karaffa says. “But if they also go and look at like DSA minutes and like Officer positions they’ll be like, ‘that’s weird, you were the co-chair of the electoral caucus, and you spent three hours on a Virginia campaign finance website.’”

Veritas notes the State Department’s non-partisan stance also appears at odds with Karaffa’s attitude when he admits his goal is to “Resist everything… Every level. F**k sh*t up.”

Asked if he’s afraid to go to jail over his actions, Karaffa says it’s not likely because “…somebody just rubber stamps [the form] and it goes forward… I don’t know if [the ethics officer is] all there. He’s so checked out…”

“I have nothing to lose,” Karaffa says, joking that “It’s impossible to fire federal employees.”

“We’ve heard a lot about the Deep State; holdovers from the previous administration resisting change or nameless and faceless bureaucrats slowing things down or leaking secrets in an effort to undermine this administration,” O’Keefe said in a statement on the Veritas website.

“What is truly striking is their boldness, they are not afraid. They are even boastful about a warped reality, where they won’t get caught and can’t get fired even if they did.”

It remains to be seen what, if any, repercussions Karaffa faces following his on-camera admissions.