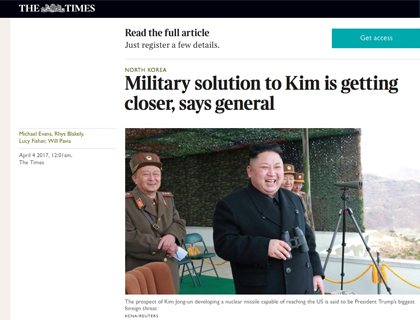 A retired general, who turned down President Donald Trump’s offer to be Secretary of Defense, suggested a preemptive strike on North Korea’s nuclear facilities “may be the only option left.”

“A pre-emptive strike against launch facilities, underground nuclear sites, artillery and rocket response forces and regime leadership targets may be the only option left on the table,” retired four-star General Jack Keane told The Times on Tuesday.

“We are rapidly and dangerously moving towards a military solution.”

“Our attempts to leverage China in the past have failed miserably,” he said. “Sanctions have not worked against North Korea and I doubt more sanctions will and I don’t believe sanctions against China will work any better.”

K.T. McFarland, the deputy White House National Security Advisor, warned the likelihood of North Korea developing the technology to mount a nuclear warhead on an intercontinental ballistic missile was growing.

“There is a real possibility that North Korea will be able to hit the U.S. with a nuclear-armed missile by the end of the first Trump term,” she said.

President Donald Trump suggested he is ready to address North Korea’s continued development of nuclear weapons and aggressive rhetoric with, or without, the assistance of the Chinese government.

“China has great influence over North Korea. And China will either decide to help us with North Korea, or they won’t. And if they do that will be very good for China, and if they don’t it won’t be good for anyone,” he told the Financial Times. “If China is not going to solve North Korea, we will.”

Any preemptive strike on North Korea would lead to a highly destructive war, with Admiral Scott Swift, commander of the US Pacific Fleet, warning the war’s economic and geopolitical impacts would be felt throughout the world.