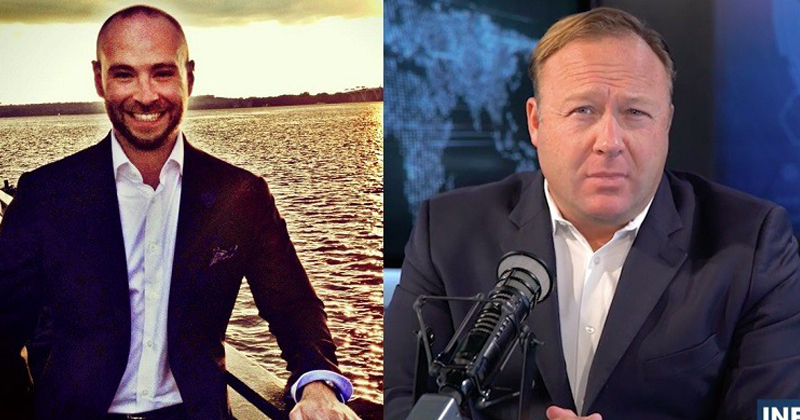 Ladies and gentlemen, I regret to inform you that the Deep State is at it again.

A Deep State veteran, Zachery Tyson Brown, who was working in the Office of the Secretary of Defense as recently as last month, took to LinkedIn to seemingly and subtly hint that he wants Alex Jones to be given the Anwar al-Awlaki treatment.

In other words, he is flirting with the idea that Jones deserves to be assassinated by the U.S. government.

Tyson Brown shared his seemingly malicious threat with the entire world, but he couched it in just the right way to maintain plausible deniability:

We killed Anwar al Awlaki for stuff like this.

“Alex Jones told listeners last week that his predictions of a war against the ‘New World Order’ was coming true and that his listeners should try to overcome their fear of death and be ready to ‘kill as many of them as quickly as possible.’”

A surge of right-wing terrorism is just waiting to be unleashed on this country, and the government must be prepared to crack down on the prion disease that’s been allowed to spread too far. [LinkedIn — Archive Link]

In the post, Tyson Brown shared a link to the extremist left-wing organization “Right Wing Watch,” which is funded by George Soros.

Right Wing Watch, a left-wing nonprofit aimed at exposing the “extreme agenda” of conservatives, owns a YouTube channel that consists entirely of other people’s videos, yet after several copyright disputes, YouTube has yet to delete the channel.

The nonprofit is owned by People For the American Way, which is funded by George Soros’ Open Society Initiative. [Daily Caller] 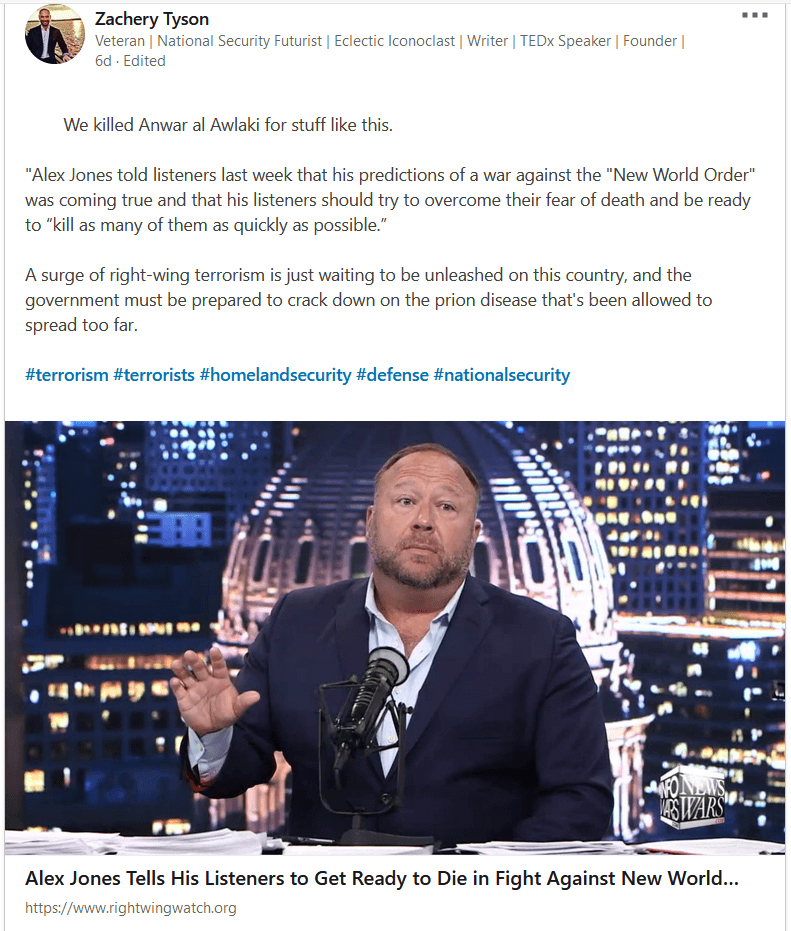 Anwar al-Awlaki, as you may recall, was an Islamic terrorist and U.S. citizen who was assassinated via an Obama drone bomb.

One of the United States’ most-wanted terrorists, Awlaki was directly linked to multiple terrorism plots in the United States and United Kingdom, including an attempt in December 2009 to blow up a jetliner bound for Detroit. He had morphed from a mainstream Muslim into one of al-Qaeda’s most public personalities and influential voices in large part because of his numerous online sermons and propaganda videos that allowed him to spread his message around the world.

In 2010 Awlaki was placed on the U.S. government’s official targeted-killing list, as authorized by President Barack Obama and approved by the National Security Council. That designation meant that, despite his U.S. citizenship, Awlaki was considered a military enemy of the United States and not subject to the country’s own ban on political assassination. On September 30, 2011, the Central Intelligence Agency used two drones to target Awlaki in Yemen, killing him and Samir Khan, another American al-Qaeda member. [Encyclopedia Brittanica]

As of just last month, Tyson Brown was actually in the Trump administration, in the Office of the Secretary of Defense.

Of course, when it comes to the corrupt weaponization of the intelligence community against American citizens, Joe Biden is usually not too far away. Tyson Brown is currently a security fellow with the Truman Project. Jake Sullivan, who is being floated as a candidate for Biden’s National Security Advisor, is heavily involved with that organization.

The ideas and advice are then sent up to a small inner circle of Biden loyalists, including Antony Blinken, Jake Sullivan, Avril Haines, Brian McKeon, and Julie Smith, who are likely to serve as the national security brain trust for a Biden administration. What happens with that advice is a mystery to many of those who supply it, with one official saying it seems like much of the policy initiatives disappear into a black hole. [Foreign Policy]

Sullivan sits on the board of the Truman Project.

The Deep State may have been able to stall and stymie many of President Trump’s America First agenda items, but this was never going to be enough to satisfy their greedy lust for blood and power. Four years without having the Commander in Chief in their back pocket has driven them completely mad, like an alcoholic who has had his bottle of liquor confiscated.

Regardless of what you think about Alex Jones, he is an American citizen who has certain rights. The right to life, liberty, and the pursuit of happiness. The right to freedom of expression and political speech. The right to be secure in his person, house, papers, and effects. People in America used to be able to say “well, I don’t like what you stand for, but this is a free country,” and mean it. But is it really a free country anymore? A tiny, angry, and belligerent minority of Maoist purity spiralers control academia and the public square, and there is no law, order, or justice for the Silent Majority.

Alex Jones may be a very radical and somewhat kooky figure. But if we do not stand up for Alex Jones, they will come for all of us. First, they came for Alex Jones and kicked him off of social media, and now they’re preventing the President of the United States from communicating with his supporters via Twitter and Facebook. If they want to “drone strike” Alex Jones today, then tomorrow, other patriotic American citizens might find themselves in the cross-hairs of the Deep States. And that is why it is high time to stand up and put an end to this madness.