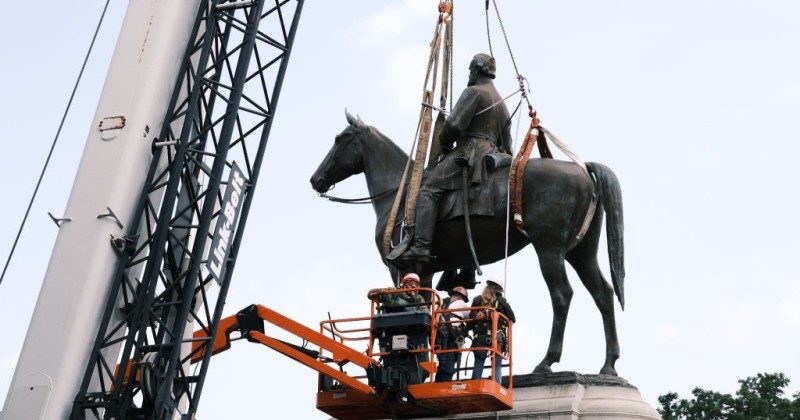 Using what he claims are “emergency powers,” Richmond, Virginia’s Democrat Mayor, Levar Stoney, ordered the removal of ALL Confederate monuments positioned on city property today, citing the potential for the spread of COVID-19 among Black Lives Matter and AntiFa-linked rioters who have held the city’s Monument Avenue under a violent siege for 33 days, perhaps becoming the first Democrat politician in America to acknowledge that rioting increases the risk for disease spread.

“Failing to remove the statues now poses a severe, immediate and growing threat to public safety…As the COVID-19 pandemic continues to surge, and protesters attempt to take down Confederate statues themselves, or confront others who are also doing so, the risk grows for serious illness, injury, or death,” Stoney said.

While Northam Administration-backed bills in Virginia’s legislature allowing for the removal of Confederate monuments and memorials took effect today, a simple vote by city council members or an executive decision by a mayor is not enough to remove them – numerous processes and procedures must take place beforehand – but Stoney did it anyways, with the apparent endorsement of Governor Northam, whose very laws the Mayor was violating.

A monumental day in Richmond that begins the important process of removing these painful symbols of our past.

The Government-sanctioned defacing of Monument Avenue, which began this morning with the removal of a monument to General Thomas “Stonewall” Jackson, who vehemently opposed Virginia’s secession prior to the outbreak of the Civil War, will take roughly a week to complete according to Mayor Stoney.

Before the removal of Jackson, a total of 12 statues dedicated to Confederate veterans and politicians lined the street, most of which have been vandalized or severely damaged by riotous mobs.

Although Richmond saw its first black mayor in 1977, and hosted the first elected black governor in American history, Mayor Stoney insisted that the statues along Monument Avenue existed to “show black and brown people in this city who was in charge.”

Unfortunately for Stoney and the mob, the massive statue of General Robert E. Lee that has become the focal point of the last 33 days’ unrest is currently protected from removal by a judge’s injunction, and a hearing to decide the statue’s future isn’t expected to take place until at least late July.

The Lee statue’s continued existence begs the question of whether or not Black Lives Matter and Antifa-linked mob members will actually vacate the area upon the removal of other statues, thereby absolving the “threat to public safety” Stoney claims is posed by the statues’ existence.

Mayor Stoney isn’t the first Virginia Democrat to take matters surrounding the statues into his own hands, as State Senator Louise Lucas was on the scene in Portsmouth, roughly an hour and a half south of Richmond, in mid-June, demanding police officers stand down and allow rioters to attempt to remove a Confederate monument located in the city. A piece of that statue later fell on a man’s head, severely injuring him.