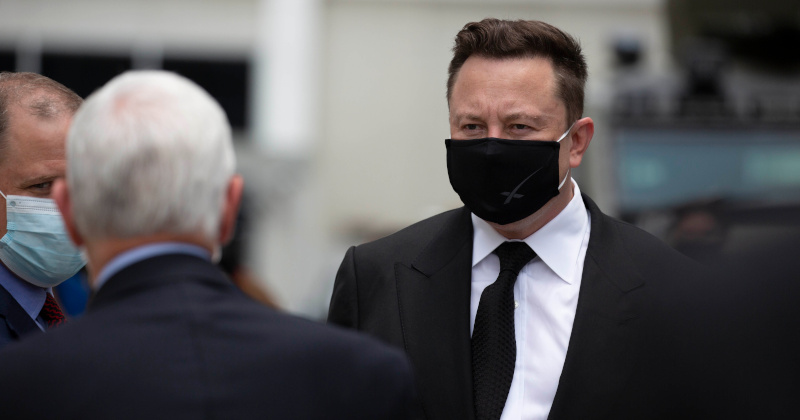 Elon Musk has expressed doubts about the accuracy of COVID-19 tests, saying that people who test positive should get another test.

The Tesla and SpaceX founder has repeatedly downplayed the severity of the pandemic and voiced his discomfort, even dissent, with social distancing guidelines and shelter-in-place orders.

“There are a ridiculous number of false positive C19 tests, in some cases ~50%,” Musk has tweeted. “False positives scale linearly with [the number] of tests.”

There are a ridiculous number of false positive C19 tests, in some cases ~50%. False positives scale linearly with # of tests. This is a big part of why C19 positive tests are going up while hospitalizations & mortality are declining. Anyone who tests positive should retest.

It wasn’t clear which data Musk was referring to, although the CDC warned last month that serologic antibody tests, which determine whether a person has been infected with COVID-19 in the past, might be wrong up to half the time.

There is no such thing as a 100-percent accurate test, and the prevalence rate (the portion of new cases occurring within a period of time) of a virus plays a big role in the eventual number of false and accurate results.

The formula is: The lower the prevalence, the lower the chance of a correct result. At a rate of 1 percent (1 infected individual out of 100), a 99-percent accurate test will be correct just half of the time. The prevalence rate of COVID-19 is comparatively low and estimated to be between 5 and 25 percent, meaning there are relatively more false positive results and fewer false-negative results.

The CDC has encouraged lab professionals to take measures to limit the likelihood of false positives, including by performing a second test on people who have tested positive.

Musk also suggested in the tweet that false positive tests are partly to blame for the “declining” number of hospitalisations and mortality rate in the United States.

He did not clarify which states he was referring to, as the situation has been uneven since the easing of restrictions across the country. As many as 16 states reported hikes in hospitalisations last week, including California, Florida, and Texas.

Elon Musk has consistently downplayed the virality of the outbreak in the United States, saying at the very onset of the pandemic that “the coronavirus panic is dumb”. He also inaccurately predicted in April that there would be “close to zero” new cases in the country by the end of April.

Give people their freedom back! https://t.co/iG8OYGaVZ0

Nationally there have been 2.5 million COVID-19 cases and more than 125,000 deaths from the disease in the US, a quarter of the global caseload and death toll.

Musk has also decried shelter-in-place orders as “fascist” and threatened to move Tesla out of California after local authorities ordered him not to reopen the company’s production plant in Fremont. He very publicly disobeyed and still reopened the plant; the authorities then caved in after Musk presented a virus prevention and control plan for the site.

Two Tesla workers told The Washington Post last week that they were fired in June after opting to stay at home, despite Musk previously encouraging employees to do so if they “feel the slightest bit ill or even uncomfortable”.

The workers believe their termination was linked to their vocal concerns over working conditions at the plant in an earlier report. Several cases of COVID-19 have reportedly been logged at both the Fremont plant and the nearby seat-assembly factory.