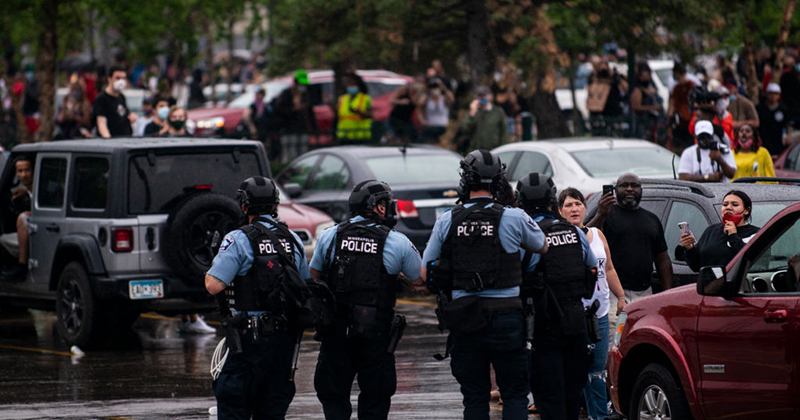 A riot broke out in Minneapolis on Tuesday after an African-American man allegedly suspected of forgery and under the influence appeared to have been choked to death by a police officer while being held down for resisting arrest.

Police said in a statement on Tuesday they were responding to a report of a “forgery in progress” on Monday evening and were told that a man was “was sitting on top of a blue car and appeared to be under the influence.”

The man, who police later identified as George Floyd, allegedly “physically resisted officers” and was held down by three officers with one appearing to put excessive force on his neck. Floyd complained that he couldn’t breathe and appeared to go lifeless after several minutes. He was taken to a hospital and “died a short time later,” according to police.

All four officers were fired on Tuesday by Minneapolis Police Chief Medaria Arradondo.

Riots broke out within 24 hours of Floyd’s death and videos show cops getting their SUV windows smashed to cheers, the police station being surrounded and more.

Protests in #Minneapolis turning violent after death of #GeorgeFloyd pic.twitter.com/GWCo0Yc5zU

People Hit The The Minneapolis Streets In Protest Of George Floyd Murder By Cops‼️✊🏽 pic.twitter.com/e598NmKVVO

Local business targeted for looting and vandalism in response to the Minneapolis police-involved killing of George Floyd. Live stream video from the scene of the riot shows youths posing with liquor bottles. https://t.co/7xNOJ5GIte pic.twitter.com/I7ae0jLFWn

The officer was doxed and leftists called for him to be murdered on social media without facing any censorship.

Earlier, some people in #Minneapolis were gathered outside the home of #DerekChauvin the race soldier who lynched #GeorgeLloyd pic.twitter.com/kb8mF80S03

Attorney Benjamin Crump, who came to fame through “The Trayvon Hoax,” is representing the victim’s family.

I said earlier this month we may see a repeat of the riots in Baltimore and Ferguson if the father and son who killed Ahmaud Arbery were acquitted.

Judging by the way things are developing and the way the media is working as hard as they can to try and incite a race war, it doesn’t appear we’ll even have to wait that long.