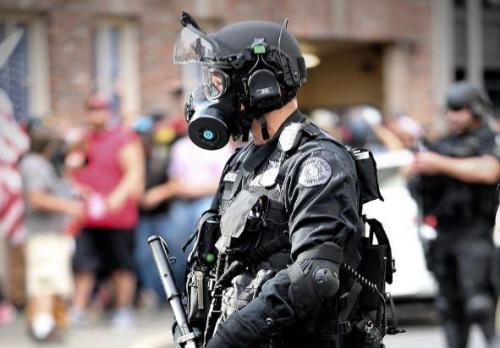 Members of Antifa clashed with members of the conservative group Patriot Prayer Saturday evening in Portland, Ore., forcing police to declare that a riot was taking place as officers fired paintballs filled with tear gas into the crowd, according to the Oregonian.

Scuffles broke out shortly after 6 pm local time as Antifa protesters pelted marchers from the conservative group with eggs, water bottles and firecrackers as the marchers spilled out into downtown Portland for their legally permitted march in support of a conservative Republican candidate for the U.S. Senate. The march followed an afternoon rally at Terry Schrunk Federal Plaza, Reuters reported.

🆘‼😬🔥 #USA: The Freedom rally in #Portland, #Oregon, crashed after the #Antifa scum attacked the #Trump supporters with sticks, stones and pepper spray. But the Trump supporters have successfully fought back! pic.twitter.com/1XtVxvK0Nv

Officers seized weapons like utility knives, clubs and chemical sprays from Antifa protesters as they gathered nearby for their counter-rally.

Portland police eventually made four arrests during the demonstrations – though they said none of them were related to the day’s events. Four others had to be taken to the hospital after being struck by projectiles.

The hostilities started escalating around 4 pm local time, as busloads of Patriot Prayer protesters arrived at Terry Schrunk Federal Plaza, while members of Antifa gathered for a counter-demonstration at Chapman Square, directly across the street.

Federal police are searching someone who just tried to come into the rally at Terry Schrunk Plaza. Not sure why, although they removed his backpack before leading him to this SUV. pic.twitter.com/zPb35XXnBH

Federal Dept. of Homeland Security police are making the new arrivals return anything that can be used as a weapon, plus any pepper spray they may be carrying. pic.twitter.com/bODdHU8L7b

There were roughly 150 Patriot Prayer protesters while the Antifa protesters numbered at least twice that. Still, the dueling protests were a fraction of an earlier march in support of immigrant families separated at the border, part of a wave of marches that unfolded in cities across the US. Nearly 5,000 people attended that event.

Patriot Prayer founder Joey Gibson, the organizer of the rally, said during a rally that he wanted to “bring light into a city that’s full of darkness”. He bashed Portland Mayor Ted Wheeler and Oregon Gov. Kate Brown. Gibson is one of 13 candidates running for the GOP nomination to face off against Democratic Washington Senator Maria Cantwell.