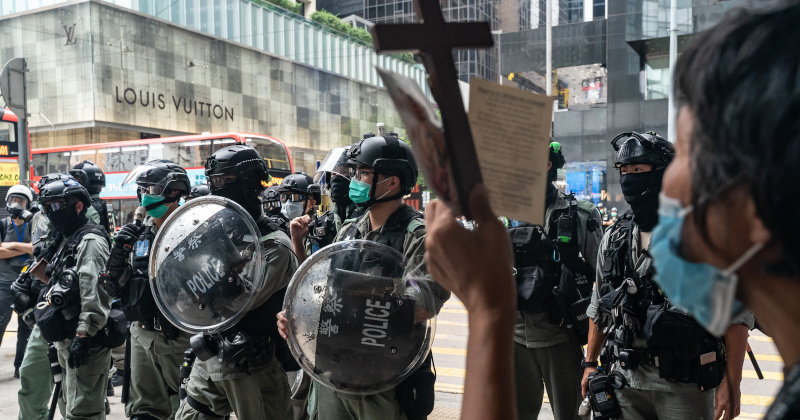 Hong Kong riot police established a blockade around the city’s legislative complex Wednesday as lawmakers prepared to debate a controversial bill that would make disrespecting China’s national anthem a crime.

Police erected water-filled barriers around the complex to keep away protesters after a call went out the night before to surround the building to derail the proceedings. But thousands of protesters gathered in the city’s business district shouting pro-democracy slogans and insults at police, who fired pepper pellets at the demonstrators to disperse them.

Hong Kong lawmakers are holding a second debate on a bill that calls for anyone who intentionally insults the anthem by booing or any other means, to face up to three years in prison and fines of more than $6,000.

The bill was introduced last year in response to fans regularly booing “March of the Volunteers” during football (soccer) matches.

The global financial hub was engulfed by massive and often violent anti-government protests during the last half of 2019, sparked initially by a controversial extradition bill that eventually evolved into a demand for greater democracy. Many Hong Kongers fear their autonomy is steadily being eroded by a central government on the mainland that is increasingly meddling in its affairs.

The debate over the national anthem bill coincides with a proposed national security law unveiled last week in China’s national congress that would prevent and punish acts of “secession, subversion or terrorism activities” that threaten national security. The law would also allow Chinese national security organs to set up agencies in Hong Kong.

The legislation has been condemned by business groups and Western nations as the death knell for Hong Kong’s status under the “one country, two systems” concept established after Britain handed over control of the financial hub to China in 1997, especially since the proposed law bypasses Hong Kong’s legislature.