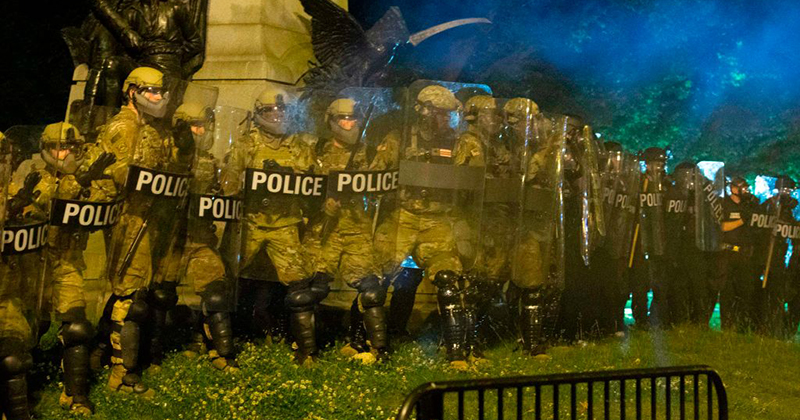 Protests in major US cities

Update (22:10ET): The military police has arrived at the White House…

Trump, in Marine One, just did a flyover of the protest area outside the White House. pic.twitter.com/yjPZ0a6Pc3

… as crowds of protesters gather.

… and as rioters charge the Police after a reported explosion:

Developing from near the White House. pic.twitter.com/dcCNQmTfPd

… and the DC National Guard has been activated:

NOW: Military Police from the National Guard are now lined up in front of the White House complex in Washington D.C.

The president does not appear too nervous, tweeting moments ago that he has activated the National Guard in Minneapolis “to do the job that the Democrat Mayor couldn’t do. Should have been used 2 days ago & there would not have been damage & Police Headquarters would not have been taken over & ruined.”

Meanwhile, NYC is going from bad to worse to downright “Joker.”

Dozens of firefighters all over Union Square putting out car fires pic.twitter.com/NBQBxAVSVB

And, just like in Chicago, the island is starting to barricade itself: the Manhattan Bridge is now shut down:

The Manhattan Bridge was temporarily shut down tonight as protestors crossed from Brooklyn. Some are now gathered at Barclays Center. Live at 11 @NBCNewYork #NYCPROTEST #brooklyn pic.twitter.com/inwvbgNLIi

Update (22:00 ET): Curfews are being imposed across the nation in response to the riots:

CURFEW IN EFFECT: Until further notice, a curfew between the hours of 9PM and 6AM is now in effect in the City of Chicago. Please stay safe. pic.twitter.com/14GcaGs2N3

#BREAKING Mayor Garcetti expands curfew to all of Los Angeles, in effect from 8 p.m. to 5:30 a.m. as violence erupts during #GeorgeFloyd protests https://t.co/LVc1yz6FIp

Update (21:53 ET): A police officer in Jacksonville has been stabbed during a protest. According to WTSP, Jacksonville Sheriff Mike Williams said a protester stabbed one of his deputies in the neck and “many people have been arrested” in protests downtown Saturday. Authorities are warning the public to stay away from the downtown area as a protest continues against police brutality.

Earlier, police officers – seemingly terrified to fight back – were attacked and dragged through the streets of Chicago.

CHAOS: Police officers dragged through the street in Chicago

And in Salt Lake City, a man yelling “all lives matter” was overpowered after pointing hunting bow at protesters.

Update (21:40 ET): New York is rapidly falling to the rioting mob, with scenes taken straight out of the joker, as cop cars get barricaded by protesters, and while some make their way out…

Watch to the end pic.twitter.com/VtCP6NV1XT

… others aren’t so lucky.

Another NYPD vehicle taken down in Union Square pic.twitter.com/fWrHkFEQDE

Meanwhile the confrontations between police and protesters are getting all too real:

Tense moments from right near #UnionSquare – as there was a face off before creating a line. An @NYPDnews officer shoved me while telling me to get back and shoved another independent photographer with a baton. pic.twitter.com/ybH5F7rxQH

The scenes are simply surreal:

Man dragged down and arrested after crowd started running. pic.twitter.com/uVIHADSlKW

Officers from @NYPD44Pct in the #Bronx just arrived in that van here in #UnionSquare pic.twitter.com/6frfbNAqQj

Over in the city of brotherly mugging, things are deteriorating fast too with a cop car on fire, as the Apple store gets looted: