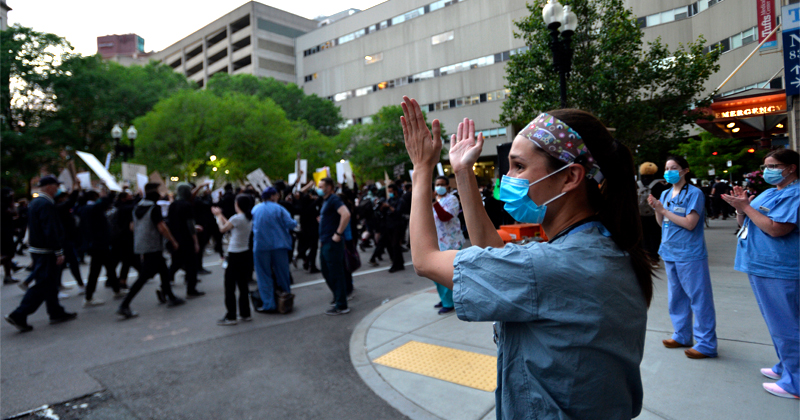 Old-Thinker News warned in 2016: “Soros and his minions will attempt to force Trump’s hand to make him fit the election propaganda narrative of being a racist, bigot ‘Hitler’ figure.”

Just a few short weeks ago when Americans of diverse backgrounds began to rally peacefully in public against the lockdowns, the media said that the rallies were dangerous, and would lead to a second wave of Coronavirus.

Pennsylvania Governor Tom Wolf said that businesses reopening and protesting against his orders were “cowardly.”

“These demonstrations are right on the mark… We need to protest injustice. We need to do something about it, and we can’t think, yeah, it’s just part of the American landscape. It has been, unfortunately. But we’ve got to change that.”

The same story is unfolding in New Hampshire, where Governor Chris Sununu has also cracked down on citizens who defy lockdown orders.

Sununu now says “I called the organizers ahead of the #GeorgeFloyd March in Manchester to let them know the State of NH stands with them in their calls for justice.”

Governors all over the country have followed the same script in an organized insurrection.

The Coronavirus narrative has collapsed. The CDC’s own numbers now show a 0.4% fatality rate. Leaked documents from the German government call the virus a “global false alarm”.

A coordinated, dangerous political agenda is playing out in America.

I warned in 2016 that Trump “will likely face a crisis moment with Soros paid protesters”. As reported:

“A warning to President Trump: You will likely face a crisis moment with Soros paid protesters

If Trump does not call out agitator George Soros by name and meaningfully deal with him, Soros will plague his administration relentlessly. The perception of the President-elect that was perpetuated by the mainstream media (racist, sexist, “literally Hitler”, etc) has become reality for a sizeable portion of the population, even if it is not based in fact. This is causing real racists and psychotic individuals to act out.

Trump could face a critical choice of action if Soros groups attempt to stage radically violent protests or war on the streets of America. Soros and his minions will attempt to force Trump’s hand to make him fit the election propaganda narrative of being a racist, bigot “Hitler” figure.”

The media is now playing this card. Trump is being cast as a brutal dictator using force against peaceful protesters.

We need to be on guard against outside forces staging false flag operations. They could come in the form of an attack against protesters and blamed on military forces.

We do not endorse offensive political violence.