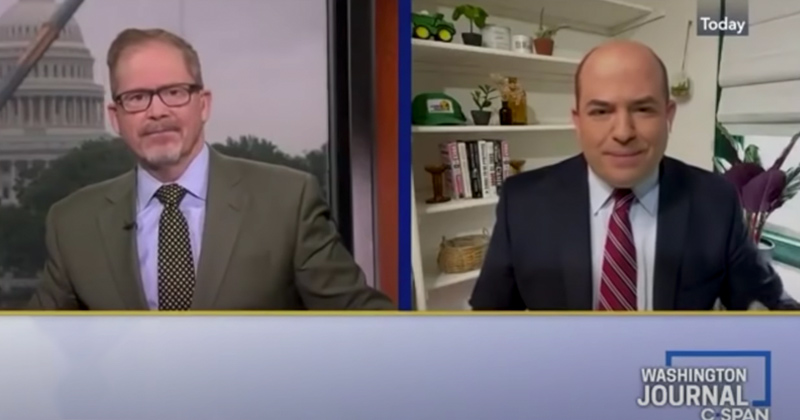 C-SPAN callers dunked on CNN’s Brian Stelter Tuesday, roasting the Reliable Sources host over his network’s blatant anti-Trump bias and its disingenuous coverage of the riots in Kenosha, Wisconsin.

Appearing on the Washington Journal program hot off the heels of his Amazon bestseller, Hoax, Stelter was assailed over his network’s shaky credibility.

“You guys always talk about how many times Trump has lied,” the caller said. “I’ve calculated that, I think with your chyrons …Yeah, I don’t know if there’s any journalists left at CNN, but I know that if I were to estimate, about 300 different distortions, or misinformation that we get out of CNN — and you have to watch them in the airport, which is harsh — but, if you added all that up to 46 months, it comes out to be 300,000-plus distortions of truth.”

The man went on to recall the network’s skewed coverage of the Covington Catholic school fiasco, which led to one student settling multimillion-dollar lawsuits with CNN and other media outlets.

“So, my thing is, you guys — this is how low you’ll go… You went out, and you made lies, and you defamed a child.”

“And I don’t believe in dividing our nation, it hurts our great nation, and so CNN is really the enemy of the truth. That’s my opinion, thank you,” the caller concluded.

Surprisingly, Stelter went on to acknowledge several media outlets are guilty of partisanship due to most journalists living in liberal-leaning major cities.

“It is absolutely true that lots of journalists are based in New York and Washington [D.C.], they’re based in big cities, they have liberal leanings, and mainstream newsrooms are built to make sure that that bias doesn’t seep into the news coverage. And yet, sometimes it does. I absolutely acknowledge that,” Stelter said.

Another caller brought up a chyron featured on CNN last month which described Kenosha riots as “fiery but mostly peaceful protests.”

“We all know you’re not reliable,” the caller bluntly told Stelter, also referring to him as “Humpty Dumpty” and “nothing but a stooge,” before the call was dropped.

Stelter proceeded to blame the “mistake” on a novice producer.

“I think that CNN banner the caller mentioned that said there were ‘fiery but mostly peaceful protests,’ that banner was probably a mistake. I don’t know who wrote it, probably a young producer who’s trying their best under deadline in a breaking news situation,” he claimed. “That kind of thing becomes easily criticized and probably not the right banner to put on the screen,”