Robert Fargo, writing for The Truth About Guns, points to an Aspen Ideas Festival web page promoting a 2013 talk by former congresswoman Gabby Giffords and her husband, former astronaut Mark Kelly. In addition to Giffords and her husband, the “Building a Movement to Keep Our Communities Safer” event featured Andrea Mitchell, the wife of former Federal Reserve boss Alan Greenspan. 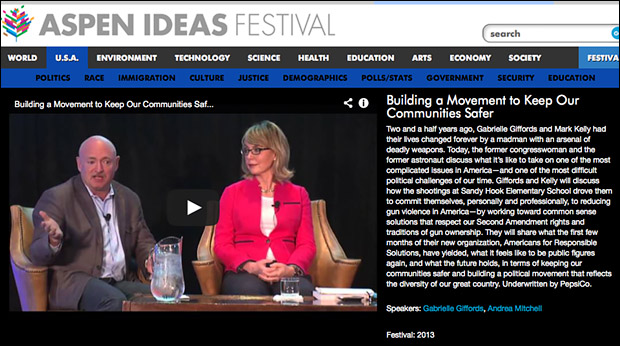 “Giffords and Kelly will discuss how the shootings at Sandy Hook Elementary School drove them to commit themselves, personally and professionally, to reducing gun violence in America – by working toward common sense solutions that respect our Second Amendment rights and traditions of gun ownership,” the web page explains.

Following the Sandy Hook shooting in late 2012, Giffords and Kelly formed Americans for Responsible Solutions, a nonprofit dedicated to encouraging “elected officials to stand up for solutions to prevent gun violence and protect responsible gun ownership.”

According to the group and others, including Mayors Against Illegal Guns formed by the billionaire former mayor of New York, Michael Bloomberg, “responsible” gun ownership entails serious government limitations on the Second Amendment not limited to banning “assault weapons” (virtually all semiautomatic firearms), mandating the size of firearms magazines (ten rounds or less), and outlawing gun shows and private sales of firearms.

The event was underwritten by PepsiCo, the transnational beverage corporation. The Aspen Ideas Festival is a week long event held in Colorado. It is a program of the Aspen Institute, a globalist think tank supported by the Rockefeller Brothers Fund and the Ford Foundation. The Ford Foundation is known for its connections to the CIA while the Rockefeller family is notorious for promoting a “liberal internationalist” philosophy through its funding of numerous globalist organizations, including the United Nations, the Trilateral Commission, the Council on Foreign Relations, the American Enterprise Institute, and others.