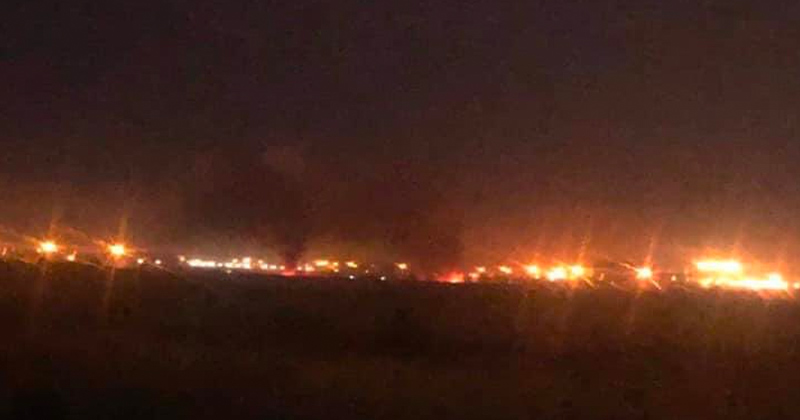 At a moment tensions are on edge after pro-Iran militia protesters attacked and set fire to the outside of the US embassy compound in Baghdad’s Green Zone earlier this week, another major incident is developing overnight.

Reuters and Al Jazeera are reporting that at least three missiles struck on or near a base that houses American and Iraqi counter-terrorism forces in the early Friday morning hours at Baghdad International Airport.

All civilian flights have been canceled as US military helicopters were also seen patrolling the skies in the immediate aftermath.

Al Jazeera has cited Iraqi security sources to say that though the rocket attacks appeared to have targeted a joint US-Iraqi training base within the sprawling airport perimeter. At lease one of the projectiles landed near a passenger terminal, causing an immediate shutdown of the civilian side of the airport.

It is the second such rocket attack on the airport in under a month, after on Dec.9 four projectiles were launched on the facility, targeting the US-Iraqi base on the property.

Footage shows civilian cars outside of Baghdad Airport on fire after being hit by missile/s. Via @omartvsd #Iraq pic.twitter.com/9lTCRLqkik

Vehicles at the airport were filmed exploding as a result of the attack, and there are conflicting reports of possible civilian casualties.

Kurdistan24 journalist Barzan Sadiq has said at least one civilian was killed in the attack with more injured, as well as multiple Iraqi military personnel among the wounded.

While details are as yet unclear and unconfirmed at this point, Reuters did confirm the following per local security authorities:

Earlier in the day Defense Secretary Mark Esper put Iran and its proxies on notice, saying the US is prepared to launch “pre-emptive action” if American troops and interests come under threat.

Alex Jones calls out President Trump for inaction and failure to protect his vocal support base and helping the Dems gain ground in the 2020 election.