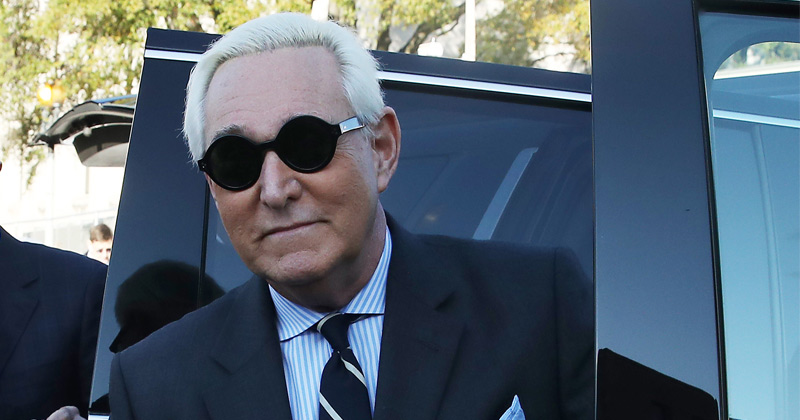 Editor’s Note: Author Jacob Engels will join The Alex Jones Show on Sunday to break down this explosive report.

Seth Cousins, juror number 3 in Roger Stone’s recent trial, just couldn’t resist the limelight. In an op-ed published by the Washington Post, Cousins claimed that the jury, who handed down a guilty verdict on all counts against Stone, acted independently and with no bias towards Mr. Stone for his previous political activities or the fact that he is one of President Trump’s most ardent defenders and longtime friends.

Reading Mr. Cousins op-ed is like reading a summation of the trial as if it were prepared by the left-wing team of prosecutors. The op-ed drips with self-righteous indignation against Roger Stone and accepts the premise of every allegation made by the federal prosecutors as if those allegations were as legitimate and solid as the Ten Commandments.

Before we review who Seth Cousins is, and what likely formed his pre-determined stance on Roger Stone and the allegations made against him by politically motivated prosecutors, we should address some of the dubious claims Mr. Cousins made in his op-ed published by the Washington Post. After that we will delve into the ethical and moral violations of profiteering from your jury service.

At first glance, many might view this as a fair and honest statement. But why didn’t Mr. Cousins also add in that the jury was diverse in political beliefs and voting patterns as well? He didn’t mention that because it would not be true. Being Washington DC, this jury was made up entirely of Democrats. The one thing that unites today’s Democrat party more than anything, across gender/race/ethnicity/income/education/occupation, is a hatred and desire to punish people like Roger Stone and Donald Trump. We see it as they engage in deranged violence on Trump supporters. We see it as they work to deplatform and digitally erase conservatives. We see it with their ongoing illegal coup efforts that they dress up as an “impeachment inquiry.” Seth Cousins purposefully left out any commentary on the political background of the jurors and how that effected their decision making process because that’s all that effected their decision making process. Every other word out of the prosecution team was “Trump” or “Russia”.

CLAIM #2: The evidence in this case was substantial and almost entirely uncontested. Stone’s testimony before the House Permanent Select Committee on Intelligence in September 2017 was a matter of record; both the prosecution and defense agreed on the facts. The real dispute was whether Stone had lied under oath and whether that mattered. The defense offered by Stone’s attorney can be summed up in to two words: So what? Our unanimous conclusion was this: The truth matters.

The evidence in the case was neither substantial and was certainly not uncontested. The government made so many inferences about so many different things. Stone called Trump and therefore they must have talked about this. Someone called someone days after something and therefore this proves they talked about something. No Mr. Cousins, the prosecution and defense did not agree on “the facts.” If they did there would have been no trial and your service as a member of the jury would not have been needed.

There was no evidence presented in the case that Corsi communicated with Wikileaks or Assange. Do your homework. https://t.co/DDgPaMEOGC

No the debate was not about whether or not Stone had lied under oath. The debate was about the context, meaning, and relevance of matters discussed and if those matters were anything but political posturing and political trade-craft. Neither of those things are illegal or improper.

Also there are phrases in this that are almost lifted verbatim from the prosecution closing statement. Interesting https://t.co/A4Bg65cUdy

Cousins’ conclusion is plucked from United States Attorney Michael Marando’s closing statement. What the heck is going on here?

CLAIM #3: We came close to rejecting one charge that we believed was written ambiguously; our question was whether Stone had actually made a particular statement. In the end, we were convinced beyond a reasonable doubt that Stone had in fact made that statement.

WOW! They briefly thought about not giving Roger Stone what amounts to spending his final years in jail for an hour or so! Mr. Cousins wants you to believe that because the jury deliberated over one of the seven counts against Mr. Stone for a short period of time that it must demonstrate that they were fair. Does he really believe people are this stupid? We were going to hang you anyways because we are all diametrically opposed to your political beliefs… but we paused for a moment to think about it… so it looked like we cared. How kind.

CLAIM #4: After the trial was over, Judge Amy Berman Jackson came to the jury room to thank us for our service. This was the only time any of us had any contact with her outside of the courtroom.

Now, let’s discuss who Seth Cousins really is. He has donated to radical presidential candidates over the past four years, including $1,000 to Beto O’Rourke and $250 to Green Party political figure Jill Stein, according to campaign finance reports publicly available on OpenSecrets. He has nearly ten years of his professional life working in high-level software development positions with Microsoft, one of the most powerful tech companies in the world founded by anti-Trumper Bill Gates. But, of course, Mr. Cousins never let his political bias and hatred of President Trump or his allies like Roger Stone cloud his judgment? 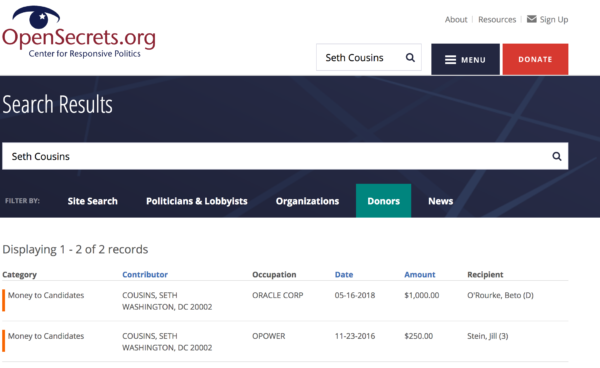 All of this really makes you think? Who are the other jurors who rendered an all guilty verdict against Roger Stone? Are they also high-level Democrat donors? Did they express personal hatred or animus towards Roger Stone or Donald Trump during the jury selection process? Further, why would prosecutors resist releasing the information gathered during the jury selection process about their political beliefs?

If Mr. Cousins serves as an example of how the other jurors felt when it came to our political system, the jury was almost certainly poisoned against Roger Stone. Johnnie Cochran in his prime would have had no chance at securing a not guilty verdict from this jury.

From the get, the idea that Roger Stone was going to get a fair trial from a jury pool selected exclusively from residents of the nearly 91% Democrat DC area was a canard and a fairy tale. Nonetheless, the check has been cashed and there’s no stopping it now.

While I was in DC to observe and report on the trial, I remember seeing Seth Cousins in the courtroom. It was bizarre how he seemed to be attentively paying attention and engaged when the prosecution was presenting their case. When the defense was on deck? I was surprised that Mr. Cousins hadn’t smuggled in ear-plugs and blue-blockers to tune them out. It seemed like he could didn’t give a rip about what Roger Stone’s attorneys had to say. In his op-ed he practically admits to NOT PAYING ATTENTION to the defense’s arguments. This alone gives Roger Stone legally sufficient cause to challenge the decision.

Why is it allowed that Seth Cousins is able to make heavily biased statements about the case before the sentencing phase while Roger Stone remains under a complete and total gag order from the judge?

Is Judge Amy Berman Jackson happy about this juror going public with an opinion editorial in the Washington Post?

None of this commentary would have been necessary or needed if Mr. Cousins had been able to resist the urge to out himself. He decided to go on-the-record with his recollection of events and subject his opinions to scrutiny. Seth Cousins made that choice. He couldn’t control himself and he has decided to make himself a public figure. To those that say this article is an attempt to intimidate him or attack him… it is not. Seth Cousins made his bed and he has to sleep in it now.

And now… the American people must make their own choice. Do we really believe that Roger Stone was judged by a politically diverse jury of his peers? Or is it more likely that he faced a jury of all Democrats who hated Donald Trump and were willing to punish Roger Stone in order to hurt Donald Trump?

“Show me the man and I’ll show you the crime.”

From the investigation to conviction, I don’t think there is a more fitting quote to describe what happened to Roger Stone. His crime? Helping Donald J. Trump defeat Hillary Clinton.

Read more at The Gateway Pundit

Roger Stone was railroaded by a system that feeds on its own power. In order for that type of power to exist, corruption must fuel the engine.