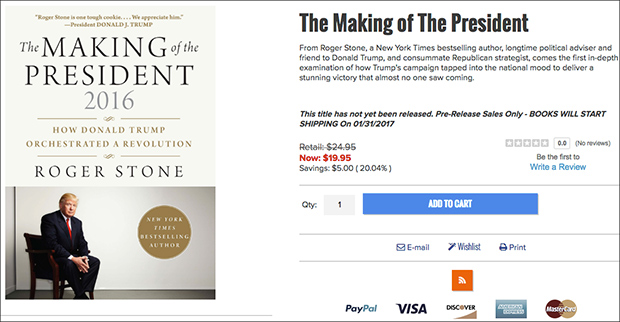 The following excerpt is from Roger Stone’s new book “The Making of the President 2016: How Donald Trump Orchestrated a Revolution.”

On November 8th, 2016, Donald John Trump was elected the forty-fifth President of the United States. This is a singular accomplishment that can only be attributed to the talent, energy, and foresight of Donald Trump himself.

Trump’s sprint across eight states in the closing days led to the greatest upset since 1948, when President Harry S Truman barnstormed across the country by train, breaking all railroad speed regulations, making six or seven stops per day, and ensuring his victory over New York Governor Thomas E. Dewey. The physical energy that Trump expended going down the stretch was indeed Herculean. There is no question that his final push into Wisconsin, Michigan, and returning to western Pennsylvania, was an act of pure will that, while Clinton was already celebrating, propelled him to victory.

The 2016 election was the first in which the mainstream media lost its monopoly over political media coverage in the United States. The increasingly vigorous alternative media, whose reporting standards are superior to the networks and the cable news behemoths, is where more and more voters are getting their information.

Trump’s skillful courting of the conservative media, like The Daily Caller, Breitbart News, WND.com, and InfoWars, made Trump the first presidential candidate to reach these disaffected and highly motivated Americans effectively. At the same time, Trump’s relentless attacks on the media as “unfair” and “dishonest” came right out of the Nixon playbook, where both Nixon and Trump exploited the resentment of the biased media, so hated by their supporters.

Trump’s willingness to challenge openly the media outlets that went after him kept them somewhat honest in their coverage of his campaign but the relentless cable news networks’ attacks on him were unlike any­thing I have seen in the nine presidential campaigns in which I worked. The media dropped all pretext of objectivity. Their motives and tactics were naked.

Most of this would largely backfire. American voters have finally become hip to the fact that the media and the political establishment work hand-in-glove to conceal many facts from the American people. The voters no longer believe the media.

Donald Trump is his own strategist, campaign manager, and tactician, and all credit for his incredible election belongs to him. I’m just glad to have been along for the ride. I wanted him to run for President since 1988 and had served as chairman of his Presidential Exploratory Committee in 2000, as well as serving as a consultant to his 2012 consideration of a candidacy.

I have worked for Trump with the Trump Organization, the Trump Shuttle, Trump Hotels & Casino Resorts, and several political explorations over a forty-year period. He is perhaps the greatest salesman in US history, with the spirit of a promoter and the infectious enthusiasm of an entrepreneur who likes making money and winning.

Trump waged the first modern “all communication” campaign, eschewing polling, expensive television advertising, sophisticated analytics, and all of the traditional tools of a modern presidential campaign.

At the same time, Trump’s campaign was centered around a “set piece rally,” just as Richard Nixon’s campaign had been. That Trump ran as the candidate of “the Silent Majority,” appealing to forgotten Americans, running as the law and order candidate and in the end, the peace candidate, was not accidental. Trump’s campaign was much like Nixon’s. He understood that politics is about big issues, concepts, and themes, and that the voters didn’t really care about wonkish detail. If they had, then Newt Gingrich would have been president.

Although there are similarities between Ronald Reagan’s victory in 1980 and Trump’s ascendancy to the presidency, Trump’s election is less an ideological victory and more a manifestation of a genuine desire for a more competent government. Like Nixon, Trump is more pragmatic, interested in what will work, as opposed to what is philosophically pure. He’s tired of seeing America lose. He is exactly the cheerleader the country needs.

Like Truman’s whistle-stop events, Trump rallies became the focal point of his entire campaign, amplified by the cable news networks that carried his rally speeches around the clock. He drew enormous crowds and voters found him funny and genuine. All the while, his trusted press aide Hope Hicks was booking as many one-on-one interviews into his schedule as humanly possible. There was literally a time when you could not turn on the television without seeing and hearing Donald Trump. The cable networks of course did it for the ratings. The fact that Trump was unrehearsed, un-coached, and unhandled, meant that voters found him refreshing and authentic.

Click the image below to pre-order your copy from the Infowars Store! 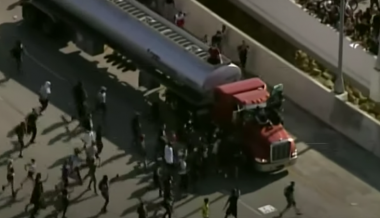