Like Obama, Mitt Romney is a wind-up doll for Wall Street and the bankers. There is virtually no difference between them despite all the fetid air from the GOP propaganda machine. 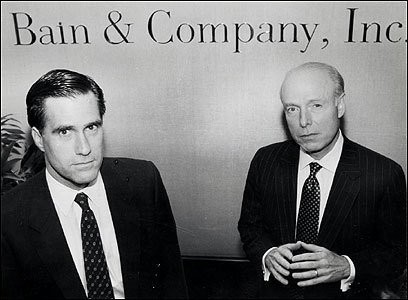 This is revealed by a quick look at Romney’s top contributors. An Open Secrets page on top Romney contributors reads like a Who’s Who of Wall Street and the financial cartel. The top contributor is Goldman Sachs, followed by Credit Suisse Group, Morgan Stanley, Bank of America, JP Morgan Chase, UBS, Citigroup, Wells Fargo and Barclays – major players in the Wall Street and City of London bankster constellation.

Bain Capital is also on the list. It is a “financial services” and investment firm co-founded by Romney. Bain owns the establishment media propaganda conglomerate Clear Channel, which explains why “conservative” talk show hosts like Limbaugh, Hannity and Levin are supporting Romney, especially with the strong showing of Ron Paul in the primaries. Both Savage (real name Weiner) and Levin have gone so far as to call Paul a threat to the country.

In December, Mitt refused to release the identity of his “bundlers,” or people who gather contributions from many individuals in an organization or community and give the cash to the campaign.

In other words, the above list is only the tip of the iceberg. Romney’s lack of transparency about his bundlers indicates he is getting money from sources that want their identity concealed.

In November, it was reported that Jimmy Lee, a veteran Wall Street investment banker, and three other top executives at JPMorgan Chase & Co hosted a $2,500-per-person reception for Romney.

“I am committed to doing all that I can to help his campaign because I also believe he is the strongest challenger to President Obama,” Lee told Reuters. Lee said he has known Romney for almost all of his Wall Street career and that he made one of the first loans to Romney at Bain Capital.

It is not clear why Mr. Lee opposes Obama – his campaign contributors are almost a carbon copy of Mitt’s. Goldman Sachs, JP Morgan (where Lee worked), Citigroup, Morgan Stanley, USB and many of the same players donated heavily to Obama’s campaign in 2008.

It should be obvious by now that the dog and pony show known as the “election cycle” in the United States is a musical chairs affair with the same gaggle of bankers and transnational corporations calling the shots.

Next time you hear Michael Savage, Mark Levin or some other bankster media whore rant and rave about the “communist” Obama and then declare their support for the “capitalist” Romney, you should realize they are selling the same poison designed to kill our republic.

There is virtually no difference between any of the establishment candidates – they are all onboard with the globalist agenda for war and the economic destruction of America as their masters and puppeteers move to consolidate their stranglehold over humanity and impose a dystopian one-world government and a high-tech control grid over the entire world.