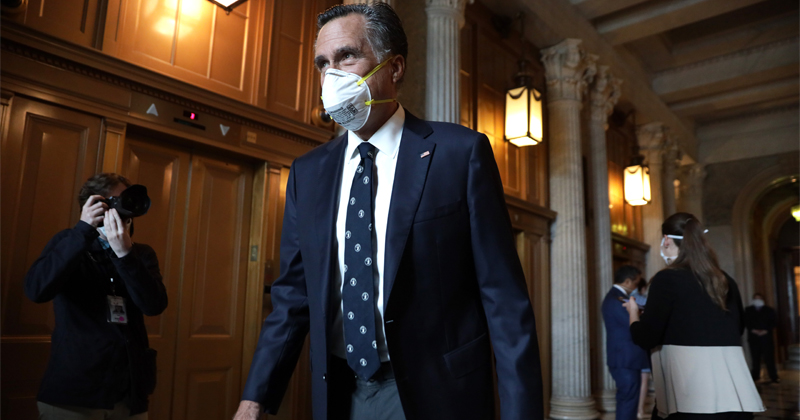 Romney, the sole Republican in Congress to endorse the impeachment of Trump, came out in support of General Mattis’s claim that Trump was making “a mockery of the Constitution” on Thursday.

“Gen. Mattis’s letter was stunning and powerful. Gen. Mattis is a man of extraordinary sacrifice. He’s an American patriot. He’s an individual whose judgment I respect, and I think the world of him,” Romney stated to reporters.

“If I ever had to choose somebody to be in a foxhole with, it would be with a Gen. Mattis. What a wonderful, wonderful man,” he added.

Romney has never actually been in a foxhole, having avoided the Vietnam War draft by getting a deferment to do Mormon missionary work in France.

Mattis served as Defense Secretary under Trump from 2017 to 2019, using his position to push for globalist policies such as increased troop presence overseas and the Paris climate agreement. During his tenure, Trump described the Secretary as a “Democrat”, given his views seemed to align much more with the anti-Trump opposition than with the President’s America First agenda.

Since Trump fired him from the administration, Mattis has emerged as a vocal voice against the President. In a statement to The Atlantic earlier this week, Mattis condemned Trump’s strong response to the Antifa riots which have broken out across the country:

“I have watched this week’s unfolding events, angry and appalled,” Mattis writes. “The words ‘Equal Justice Under Law’ are carved in the pediment of the United States Supreme Court. This is precisely what protesters are rightly demanding. It is a wholesome and unifying demand—one that all of us should be able to get behind. We must not be distracted by a small number of lawbreakers. The protests are defined by tens of thousands of people of conscience who are insisting that we live up to our values—our values as people and our values as a nation.” He goes on, “We must reject and hold accountable those in office who would make a mockery of our Constitution.”

“Donald Trump is the first president in my lifetime who does not try to unite the American people—does not even pretend to try. Instead, he tries to divide us,” Mattis writes. “We are witnessing the consequences of three years of this deliberate effort. We are witnessing the consequences of three years without mature leadership. We can unite without him, drawing on the strengths inherent in our civil society. This will not be easy, as the past few days have shown, but we owe it to our fellow citizens; to past generations that bled to defend our promise; and to our children.”