“It sounds like the revolution is alive and well” Ron Paul said last night as he strode out into a stadium brimming with around SEVEN THOUSAND people.

Reports stated that participants had waited in line as long as nine hours to get a seat to hear the Congressman speak for over 45 minutes at the UCLA Straus Stadium. Once the stadium was full beyond capacity, hundreds of people still waited outside and had to be turned away by marshals concerned about overcrowding.

The huge crowd represented the largest attendance for any of the GOP candidates during this campaign and broke Paul’s own attendance record, which was remarkably set the previous night!

A stunning 6200 plus had packed into the grounds of California State University, Chico’s Bell Memorial Student Union Tuesday. Of course, the mainstream media was no where to be seen as usual. Paul noted that only a handful of reports emerged with one describing “hundreds” in attendance. 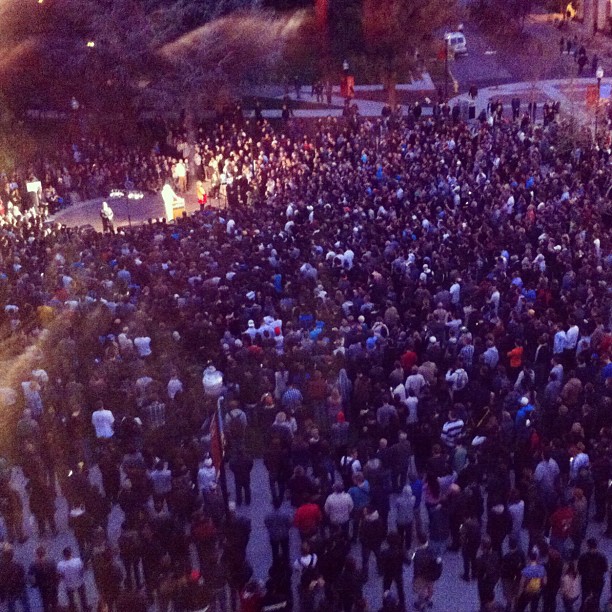 The issues Paul addressed Wednesday night ranged from the war on drugs, to the freedom stripping NDAA and the actions of the TSA.

“The problem… boils down to one thing — government is way too big,” Paul said.

The Congressman noted that January 1, 2012 saw the passage of forty thousand new federal laws in America. “I want to be the first president to repeal forty thousand laws.” Paul told the crowd to rapturous applause.

Paul also drew wild cheers when he said “it’s time to change our foreign policy. Why don’t we look at the Constitution? There’s no authority for us to occupy other nations and tell them what to do, so we shouldn’t be in the business of occupying.”

Watch the speech in Full:

Watch the Congressman’s speech to over 6000 in California:

Tonight Paul is scheduled to speak at UC – Berkeley where he is sure to draw another huge crowd.

The fact that people continue to turn out in their thousands to see Paul, while the other candidates struggle to muster crowds over 100 emphasizes the fact that Paul’s message still has a vital role to play in this campaign.

The other candidates represent the same tired status quo. Their dwindling crowds, in comparison to Paul’s enthusiastic masses, highlight the apathy and disinterest with which the majority of Americans look upon establishment politicians.