Once again, Rep. Ron Paul represented the voice of reason at the latest Republican debate held on Saturday in Spartanburg, South Carolina.

Asked about attacking Iran, Paul said the president is obliged to follow the Constitution and go through Congress before attacking the country. He compared the current situation to the one before the United States launched its invasion of Iraq in 2003.

“I’m afraid what’s going on right now is similar to the war propaganda that went on against Iraq,” he said.

Mitt Romney and Newt Gingrich strongly advocated going to war with Iran. Romney said that if “crippling sanctions” fail, military action would be used because it is “unacceptable” for Iran to become a nuclear power like the United States, Russia, Britain, China, France, India, Pakistan, North Korea and Israel.

Last week in a Wall Street Journal op-ed, Romney said that as president he would send war ships to the region and work with Israel to undermine Iran.

Gingrich advocated “maximum covert operations” and assassinating Iran’s scientists. He said the United States should destroy Iran’s “systems, all of it covertly, all of it deniable.”

He previously said as president he would “green light” an Israeli attack on Iran. He doesn’t think it right for the United States to tell an ally and one “whose people have already endured one holocaust” that it may not do what it deems necessary for its own survival.

Gingrich has also called for bombing Iran’s oil refinery in addition to its nuclear facilities.

Prior to the latest debate, Rick Santorum released a radio ad bragging about his experience on the Armed Services Committee and his efforts aimed at Iran. He also called for covert attacks on Iran and the murder of its scientists. 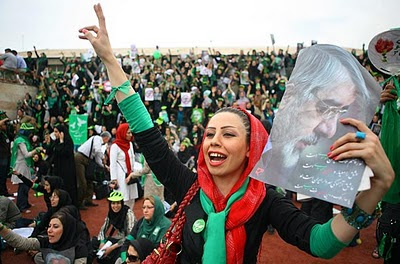 Iran has accused the U.S. of orchestrating a color revolution.

In 2009, Iran said it discovered an effort by the CIA to orchestrate a “soft revolution” in the country. The plan was based in Dubai and similar to a U.S. plan that targeted the Soviet Union in 1959, according to the director of the counterespionage department of the Intelligence Ministry.

Iran blamed the Woodrow Wilson Foundation, the Soros Foundation, AIPAC, and said agents in the Azerbaijan Republic, Turkey, the United Arab Emirates, and Kuwait were used in the effort.

At the time, the Brookings Institute produced a report calling for provoking war with Iran, arming and supporting terrorists within the county, and funding and organizing a color revolution.

A terror campaign against Iran’s nuclear scientists is already underway. In August, Iran prosecuted a man it claimed was part of an Israeli assassination effort.

A source in Israel’s intelligence community told the German magazine Der Spiegel earlier this year that Mossad was behind the assassinastion of Dariush Rezaeinejad, a member of the Atomic Energy Organization of Iran. Iran has blamed Mossad, the CIA and MI6 for assassinating its scientists.

In May of 2007, then president Bush gave approval to the CIA to launch a covert “black” operation to destabilize the Iranian government, according to current and former officials in the intelligence community.

The United States has supported and encouraged the Iranian militant group, Jundullah, that has conducted deadly raids inside Iran.

The al-Qaeda affiliated Sunni terrorist group has launched a number of attacks, including one in October of 2009 that killed over forty people. The CIA has supported other terrorist groups in Iran as well, including Mujahedeen-e Khalq.