Blasts MSNBC Pundit for “putting words in my mouth” 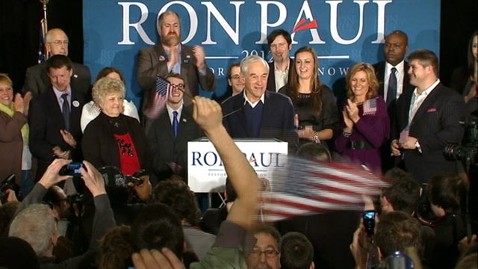 Ron Paul gave a good account of himself this morning in a series of interviews following his second place finish in the New Hampshire primary. One interview in particular stood out as Paul defended his foreign policy from claims that it is “kooky”.

In a somewhat bizarre change of subject during an interview with Fox & Friends, host Gretchen Carlson seemed embarrassed, stating “Congressman, excuse me for saying this but do you believe some people call you kooky… for your foreign policy only? Is that the reason why?”

Paul responded “They use those terms because they can’t defend themselves intellectually.”

“If they say my foreign policy is kooky, maybe they ought to look at what is happening.” Paul added. “…invading a country like Iraq, who never did a thing to us, killing a lot of people and turning it over to the shiites who are allies with the Iranians, I call that kooky.”

“I call it kooky allowing our president now to go into numerous countries, even today he went into another African country without permission of the Congress. Fighting undeclared wars, that is kooky, and that is why the American people are sick and tired of what we have.” Paul urged.

“They choose that term to discredit me because I’m the consistent one.” Paul said, referring to his critics.

“Spending more money overseas is conservative? Where did that come from?” Paul stated. “Too many conservatives say ‘that’s our position, spend more overseas’. That doesn’t make any sense to me.”

During the interview Paul also spoke about the vibrant appeal his campaign has to young voters after picking up over 50 percent of the 18-30 vote in new Hampshire last night. He also commented on how the campaign will approach South Carolina next week.

In a separate interview with MSNBC’s ‘Morning Joe’, Paul hit out at a pundit who seemed intent on persuading the Congressman to endorse scrapping the federal Head Start program.

After explaining to pundit Mark Halperin that technically the program, which provides benefits to low-income children and their families, is unconstitutional, Paul noted that it was not a top priority as far as he was concerned.

“Some conservatives would say, ‘lets cut Head Start and say we’re cutting something’, no, we have to cut the big things, cut five departments, cut some of this occupation overseas and these senseless wars. And then try to work our way out and take care of people who have become so dependent.” Paul added.

Presumably believing it would make a good sound bite for his critics to attack Paul with if he were to advocate abolishing Head Start, Halperin pressed the Congressman on the issue.

“So if you had your way you would abolish Head Start?” Halperin again asked, looking for a canned answer from Paul.

“You’re just putting words in my mouth. I don’t know what your goal is. I just explained myself very clearly.” Paul asserted, once again explaining that somewhere down the line he would hope to look into changing programs like Head Start.

“But to make everything I’m saying into ‘oh Ron Paul’s out to stop Head Start,’ you’re missing my whole point. I mean, it’s a total distraction what you’re talking about.” Paul added.