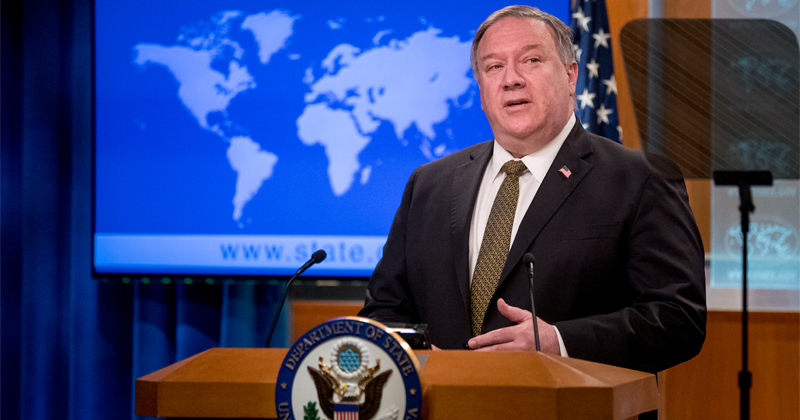 The US foreign policy establishment has for decades been dominated by neoconservative interventionists and falsely-named “humanitarian” interventionists. These people believe that because the United States is the one “exceptional nation,” no conflict anywhere in the world could possibly be solved without our butting our noses into it.

One of President Obama’s few foreign policy successes was to work with European countries on a deal that would see a reduction of sanctions on Iran in exchange for a series of Iranian moves demonstrating its abandonment of a nuclear weapon.

The American neocons as well as the hardliners in Saudi Arabia and Israel were furious at the compromise, but for a couple of years it showed real promise. Trade between Europe and Iran was increasing and there was no evidence that Iran was reneging on its obligations. Even American companies were looking to Iran for business opportunities. Whenever goods flow between nations, war becomes less likely.

President Trump has had problems with policy consistency throughout his first term in office. But, unfortunately, his few policy consistencies have been the most ill-advised ones. On the campaign trail Trump relentlessly attacked Obama’s Iran policy and promised to pull the US out of the JCPOA Iran agreement.

Unfortunately for America, he followed through with this policy in 2018. Though he promised that by pulling out of the deal the US would get a far better deal in its place, the truth is Trump’s Iran policy has produced nothing but negative results. The Iranians have not knuckled down under the weight of Pompeo’s pressure, and putting regime change specialists like Elliot Abrams in charge of Iran policy has just moved us closer to an unnecessary war.

Iran is not a threat to the United States, no matter what lies the neocons put forth.

These past two weeks the weakness in the US “maximum pressure” policy toward Iran has been exposed for the world to see. First, Pompeo spent the summer lobbying European nations to support a US motion in the UN Security Council to extend an arms embargo against Iran. As Iran has been judged in compliance with the Iran deal, the arms embargo is scheduled to be lifted in October. Pompeo’s diplomatic skills did not produce the desired results: not a single party to the Iran nuclear deal voted with the US to extend the embargo.

Undeterred, the Trump Administration is now determined to trigger the “snap-back” sanctions on Iran, which means if Iran is judged to be in violation of the Iran nuclear agreement all the previous sanctions would snap back into place.

But there’s a problem with this: because the US has formally withdrawn from the Iran agreement it has no legal standing to trigger the “snap-back” of UN sanctions on Iran. If you take your marbles and go home, you don’t get to still dictate the rules of the game.

Last week Pompeo attempted to trigger the “snap-back” and was laughed out of the room by the countries who have remained in the deal.

US policy toward Iran is an unwise consistency and the Trump Administration is hopelessly floundering on the bad advice of the neocons. They want nothing more than war on Iran. But the American people do not. It’s time to end this failed policy of confrontation with Iran.

Even the Bureau of Labor Statistics doesn’t believe its own unemployment numbers as Trump’s poll numbers hit the levels of Carter. Unlike Carter’s helplessness with a few Americans held hostage by Iran, most Americans are held hostage by lockdowns and lootings. Most Trump supporters still believe Fauci/CDC lies about COVID. The authoritarian precedent must be confronted and dismantled.