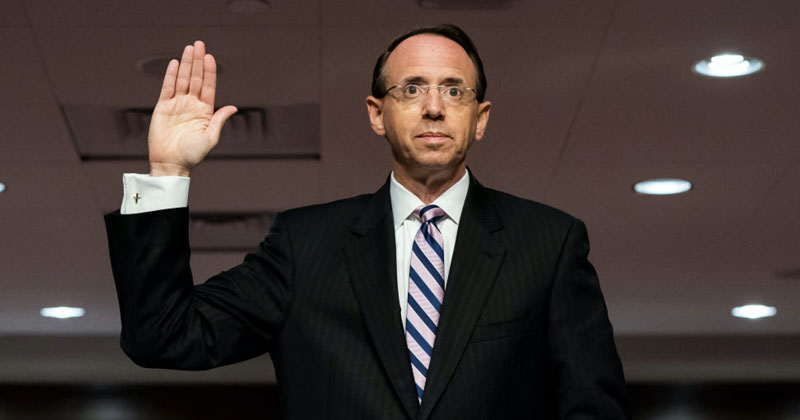 Former Deputy Attorney General Rod Rosenstein made some bombshell admissions during his Congressional testimony on Wednesday, including that he saw no evidence to warrant the FBI special counsel’s investigation into Donald Trump’s campaign.

During his testimony before the Senate Judiciary Committee, Rosenstein admitted to Sen. Lindsey Graham (R-S.C.), the committee chairman, that the Special Counsel Robert Mueller had found no evidence of “collusion” between Trump’s campaign and Russia several months into his probe.

“The whole concept that the campaign was colluding with the Russians, there was no there there in August 2017. Do you agree with that general statement?” Graham asked.

“I agree with that general statement,” Rosenstein responded.

Rosenstein went on to say that he would not have signed off on several Foreign Intelligence Surveillance Act (FISA) warrant applications into Carter Page given the exculpatory evidence now made available.

Graham: “So if you knew then what you know now would you have signed the warrant application?"

Rosenstein: “No, I would not.” pic.twitter.com/bC7omvMuIP

“If you knew then what you know now, would you have signed it?” Graham asked.

Rosenstein responded, “I would not.”

Graham went on: “The reason you would not is because Mr. [Michael] Horowitz found that exculpatory information was withheld from the court — is that correct?”

Rosenstein responded, “Among other reasons.”

When asked by Sen. Josh Hawley (R-MO) why he “rubber stamped” the FISA applications given the presence of “17 significant errors and omissions” within them, Rosenstein said that like the FISA court, he trusted the information that the FBI provided him.

During his testimony, the former Deputy AG also implicated fired Deputy Assistant FBI Director Andrew McCabe for not being “candid” about Director James Comey’s memos detailing his briefings with President-elect Trump, and the FBI’s underlying “suspicions” about him.

"I believe, Senator, that Mr. McCabe was not fully candid with me. He certainly wasn't forthcoming."

Rod Rosenstein says Andrew McCabe did not reveal @Comey's suspicions about @realDonaldTrump "for at least a week" after he became acting FBI Director. pic.twitter.com/48RXsPreGc

Is the United States on the Brink of Another Civil War?