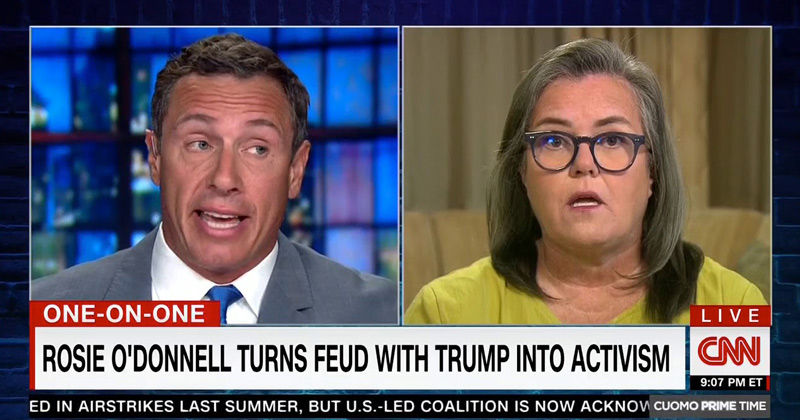 Rosie O’Donnell claimed thousands of supporters who show up to President Trump’s rallies are paid.

O’Donnell spouted the unfounded conspiracy theory in an interview with Fake News CNN’s Chris Cuomo Monday, who actually pushed back against the deranged leftist’s claims.

“He’s bad because he doesn’t know how to inspire people, or evoke that emotion in them of truth and of knowing,” O’Donnell complained.

“What about his rallies?” Cuomo questioned.

“First of all, people are paid, Chris, you know that! People were paid since he went down on the escalator,” O’Donnell shot back. “He pays people to show up at those rallies. That is a fact!”

“Right, but I don’t know that that’s why he gets tens of thousands at the rallies. I think he captures a lot of emotion for people,” Cuomo said, casting doubt on O’Donnell’s comments.

“Oh, not at the Tampa [rally]. I think they only had 9,000 seats, and there were people outside,” Cuomo explained.

“But Rosie, I’ve seen them! He gets big groups of people who come out. He gives themes that resonate. Whether they’re positive, or not that’s up to other people to decide”

“I don’t have the facts that his crowds have been bought off. I don’t know that!” Cuomo said.

O’Donnell then claimed there are “requests for extras to come and cheer” at Trump rallies with signs.

“Those are not real rallies!” Rosie insisted.

The comedian’s appearance followed a demonstration Monday, in which O’Donnell and several Broadway performers held a musical protest outside the White House.

The tense history between Rosie O’Donnell and Donald Trump stretches back years.

During a 2006 interview with Entertainment Tonight, Trump had some choice words about her.

“If I were running The View I’d fire Rosie, I mean I’d look her right in that fat, ugly face of hers, I’d say, ‘Rosie, you’re fired.'”

Those comments resurfaced during a Republican presidential debate in 2015 when moderator Megyn Kelly asked about his supposed “war on women.”

“You’ve called women you don’t like fat pigs, dogs, slobs…” Kelly rattled off, to which Trump replied, “Only Rosie O’Donnell.”

Rosie is crude, rude, obnoxious and dumb – other than that I like her very much!

In 2017, Trump said he finally agreed with something Rosie said — that former FBI Director James Comey should be fired.

We finally agree on something Rosie. https://t.co/BSP5F3PgbZ