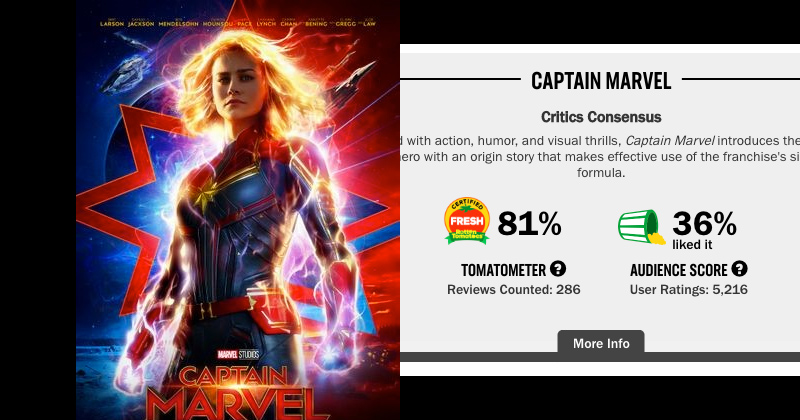 Tens of thousands of reviews for the film Captain Marvel were purged from the movie review site Rotten Tomatoes, but the deletions didn’t appear to improve the movie’s approval rating by much.

Screenshots of Rotten Tomatoes early Friday showed over 58,000 people had scored the movie an audience rating of 31 percent.

Fun fact: #CaptainMarvel already has 58,000 user reviews on @RottenTomatoes with a "shockingly low" score of 31% (average user rating – 2/5). For reference, HOW TO TRAIN YOUR DRAGON 3 (which has been out for nearly a month just in North America) has just 51k user reviews. pic.twitter.com/JlL3Hj8bxi

Later in the day, however, the amount of user ratings was inexplicably reduced to just over 4,200. 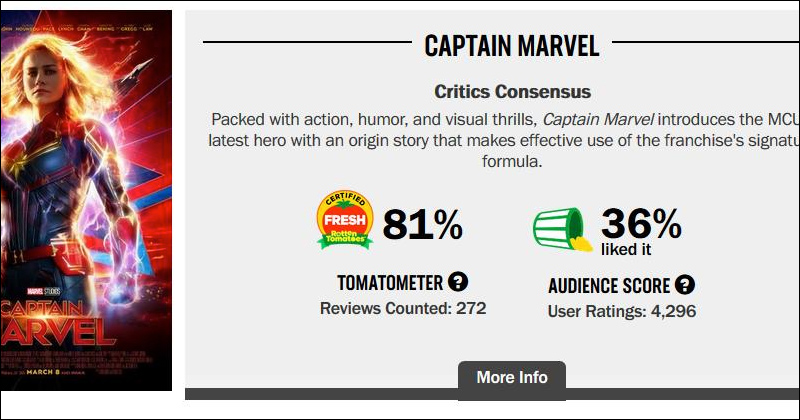 But the removal of over 50,000 reviews barely managed to eke the audience rating up five notches to 36 percent.

They got rid of 54,000 audience reviews for #CaptainMarvel , and they're still in the thirties, great job rotten tomatoes. pic.twitter.com/yyyWWtixNU

The review bomb and censorship effort comes in the wake of Rotten Tomatoes announcing last month it would take measures to weed out reviews from trolls attempting to smear movies before they’re released.

“Unfortunately, we have seen an uptick in non-constructive input, sometimes bordering on trolling,” a blog post from the site read last month, revealing a new system which would only allow users to rate movies which have already been released.

The film, which debuted in US theaters Friday, has been at the center of a culture war dispute amid accusations it promotes “Social Justice Warrior” politics after lead actress Brie Larson commented last month critics and press reviewing her movies appeared to be “overwhelmingly white male.”

While Rotten Tomatoes is censoring users, a new comment system named Dissenter from the social media site Gab is still allowing users to make reviews on the site and has currently racked up over 3,000 comments.

Guys don’t worry about @RottenTomatoes scrubbing user reviews from the Captain Marvel page. We are working on a Dissenter rating system as we speak so you’ll be able to rate it soon. For now you can comment on it and they can’t remove it: https://t.co/F4LoQoOgBx