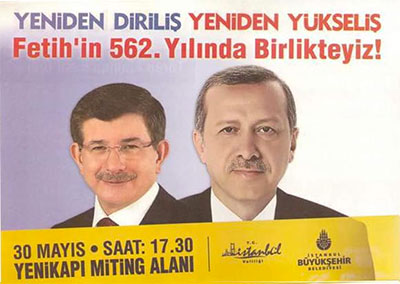 Republican presidential candidate Marco Rubio told Fox News earlier this week if push comes to shove the United States must side with Turkey in a confrontation with Russia.

“They are a member of the NATO alliance,” Rubio said, “and if we were not to come to Turkey’s defense in any instance, it would undermine the NATO alliance and that is something we need to understand.”

“This is a critical moment,” Rubio continued. “If Russia believes they can respond and retaliate against Turkey and NATO is not going to do anything about it, what they are basically doing is making the argument NATO is no longer viable, that it is a feckless alliance. So it is important for us to be very clear that we will respond and defend Turkey as they come under assault by the Russians. Otherwise the entire NATO alliance comes into question.”

In other words, according to Rubio, the United States and NATO must support Turkey’s regional ambitions, including Erdogan’s desire to reestablish the Ottoman Empire and a caliphate.

During the election campaign “AK Party luminaries took to the stage to invoke the greatness of the Ottomans, a legacy they promised the New Turkey would revive under the leadership of the Great Leader Erdogan,” writes Adnan R. Khan.

Erdogan plans to rewrite Turkey’s Constitution and transform the country from a parliamentary democracy into a presidency. “His grip on power would be assured and most experts agree he would use that power to expand his project of reclaiming Turkey’s historical role as leader of the world’s Sunni Muslims.”

Syria and Iraq are key to realizing this Ottoman resurgence. “Turkey’s goal is to try and revive the Ottoman Empire that was earlier divided into provinces. There were the provinces of Damascus, Mosul, Aleppo, Jerusalem, Beirut, and so on, and it is this main goal that’s leading to the wish to divide Syria and Iraq into emirates or provinces that would exist under the protectorate of the empire and in its interests,” claims Syrian Information Minister Omran al-Zoubi.

DIA Plan for an Islamic Principality

This plan dovetails with a Defense Information Agency scheme to create an Islamic protectorate in Syria.

“If the situation unravels [in Syria] there is the possibility of establishing a declared or undeclared Salafist principality in eastern Syria… and that is exactly what the supporting powers to the opposition want, in order to isolate the Syrian regime,” the recently declassified documents from 2012 states.

Rubio knows the score. He sits on the Senate’s Committee on Foreign Relations and the Select Committee on Intelligence. He also knows Turkey supports and funds the Islamic State. Turkish support for the terrorist army is admitted by numerous experts on the Middle East, the Kurds, the Iraqis and even Vice President Joe Biden.

“All along there’s always been the idea that Turkey was supporting ISIS in some way,” former NATO Supreme Allied Commander Gen. Wesley Clark said recently. “Someone’s buying that oil that ISIS is selling, it’s going through somewhere, it looks to me like it’s probably going through Turkey, but the Turks haven’t acknowledged that.”

The financial ruling elite want the secular states of the Middle East—Iraq, Libya and Syria—dismantled and the resultant ethnically balkanized mini-states fully under the control of Sunni overlords. A new corporatized Sykes-Picot arrangement has an ideal partner in Turkey, a NATO partner with a modern military backed up by the rhetoric of American politicians like Marco Rubio.