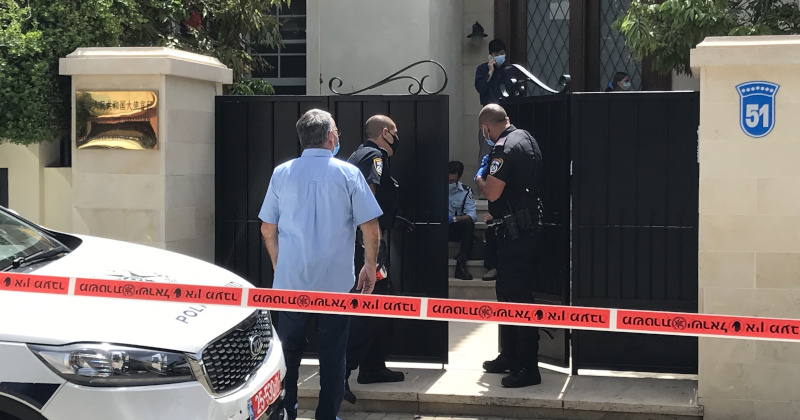 China’s Ambassador to Israel has been found dead inside his home near Tel Aviv Sunday morning, Israel’s Foreign Ministry has confirmed.

57-year old ambassador Du Wei had only assumed his post in February 2020 in the midst of the coronavirus pandemic, due to which he entered a two week mandatory self-quarantine upon his arrival. He’d previously been China’s envoy to Ukraine and is survived by his wife and son, who were not yet in the country.

Police were reported outside his residence in Herzliya, which lies just north of the Israeli capital, conducting an investigation but have told the media Wei’s death isn’t being treated as suspicious.

However, a number of commentators are highlighting the context of tensions between the US and China inside Israel as being essentially in a state of behind-the-scenes diplomatic war after Secretary of State Mike Pompeo’s visit there last week.

Pompeo sought to urge the Israelis against trading or investing with China, especially the agreement for China to start operating Haifa Port in 2021. As multiple reports underscored:

On Wednesday, Mr Pompeo denounced Chinese investments in Israel and accused China of withholding information about the coronavirus outbreak.

Washington has sought to strip China of ability to exercise influence in this strategically key part of the Mediterranean where the US Navy’s 6th fleet often docks and restocks.

While there was no immediately forthcoming statement on the ambassador’s death out of the Chinese Foreign Ministry, it is likely Beijing has yet to rule anything out in terms of the suspicious timing of it all.

#China’s ambassador to #Israel Du Wei was found dead in his home on Sunday sparking rumors and an avalanche of media coverage. https://t.co/oWVmpmD56Z

Meanwhile, Israeli newspapers were quick to underscore that the immediate rapid spread of the news across global press almost immediately after the discovery of the death was accompanied by widespread rumors and speculation.

“The level of conspiracies and anti-China comments after the death of the ambassador reached a crescendo on Sunday afternoon,” Jerusalem Post wrote.

This is also due to it being rare that an ambassador dies while on the job, as multiple reports have noted.