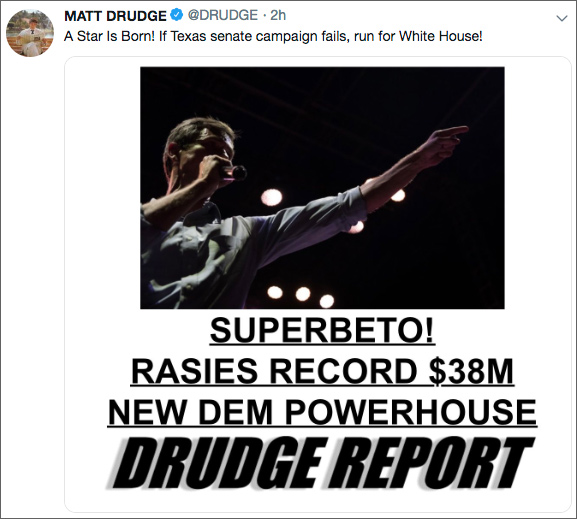 The whirlwind of financial support behind Texas senatorial candidate Robert O’Rourke has made him a promising figure for the Democrat party, influential media mogul Matt Drudge noted in tweets Friday.

The chief editor of the largest independent news site noted O’Rourke is making speeches to enthusiastic crowds, as his website DrudgeReport.com hailed the El Paso native as “Superbeto” following reports his campaign raised over $38.1 million – the most ever raised by a US Senate candidate. In contrast, incumbent Ted Cruz has reportedly raised $24.9 million.

“Supporters cheer as Democratic Senate candidate Beto O’Rourke addresses the crowd during a campaign rally at White Oak Music Hall in Houston, Texas,” the conservative-leaning Drudge wrote in one tweet, showing a picture of a fawning audience in Texas. 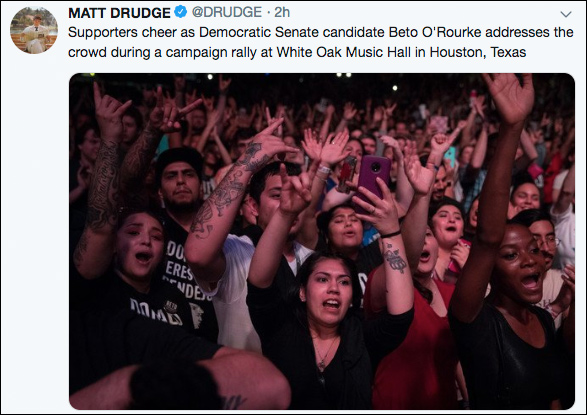 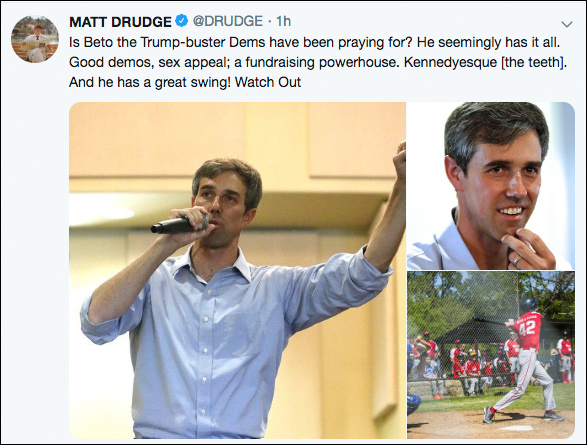 “Is Beto the Trump-buster Dems have been praying for? He seemingly has it all. Good demos, sex appeal; a fundraising powerhouse. Kennedyesque [the teeth]. And he has a great swing! Watch Out,” Drudge warned Republicans.

The long-shot candidate’s popularity and momentum, which will likely not be enough to turn Texas blue, could eventually propel him to the national stage and possibly to the presidency, Drudge also predicted.

“A Star Is Born! If Texas senate campaign fails, run for White House!” the journalist who helped bring down the Clinton dynasty declared.

“Will Texas voters have the last say and shut down the show? Or does Beto have a bigger destiny?” Drudge questioned, laying down the gauntlet for Republican Texans. 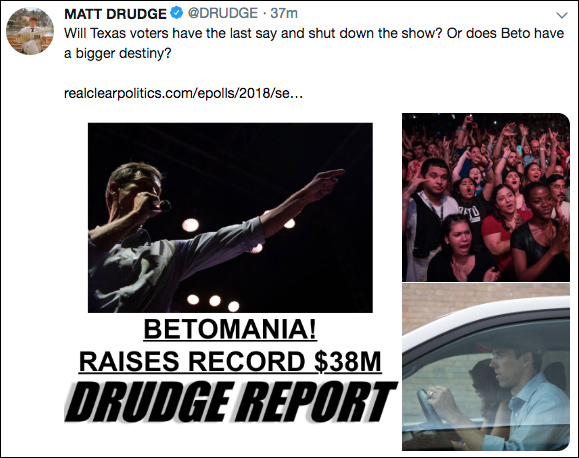 O’Rourke celebrated the fundraising record in a statement, saying, “The people of Texas in all 254 counties are proving that when we reject PACs and come together not as Republicans or Democrats but as Texans and Americans, there’s no stopping us.”

But while O’Rourke’s war chest is filled to the brim, it’s impossible to know how much of his donations actually came from Texas, according to The Texas Tribune, since donors under $200 aren’t required to be revealed per FEC rules.

In the past, Beto’s hosted high profile fundraisers in New York City with celebrities such as Lady Gaga, John Mayer and Sting. He also held fundraisers for well-heeled donors in Silicon Valley, where ticket prices to his event ranged from $250 to $5,400.

Cruz called out the Democrat challenger’s numerous California fundraisers in September, at one point joking the Hollywood sign should be changed to read, “Betowood.”

We've been told that Hollywood is afraid of being outdone by New York after last night's fundraiser, so now they're pulling out all the stops… #TXSen #DontCaliforniaOurTexas pic.twitter.com/Bak8D9sfGW

“We’ve been told that Hollywood is afraid of being outdone by New York after last night’s fundraiser, so now they’re pulling out all the stops,” Cruz wrote in September.

While Cruz himself has also held at least one fundraiser in Orange County, McClatchy DC reported last October that “Most of Cruz’ campaign money comes from Texas.”

Infowars has previously reported a “blue wave” is unlikely in Texas due to O’Rourke’s far-left liberal platform, which won’t appeal to Texas voters who value border control, the Second Amendment and the rule of law.

Beto has made it clear he supports a radical liberal agenda that would like to see AR-15s banned, no wall built on the southern border with Mexico, the abolition of the ICE federal agency and would support impeachment of President Donald Trump.

Despite the Democrat making history Friday, it’s unlikely he’ll win Texas (polls show him trailing Cruz by at least 5 points), but as Drudge points out, his vitality and support could position him for a future presidential run, especially considering Dems have few viable candidates capable of defeating President Trump.

Whether they’ll tap him in 2020 or beyond remains to be seen.