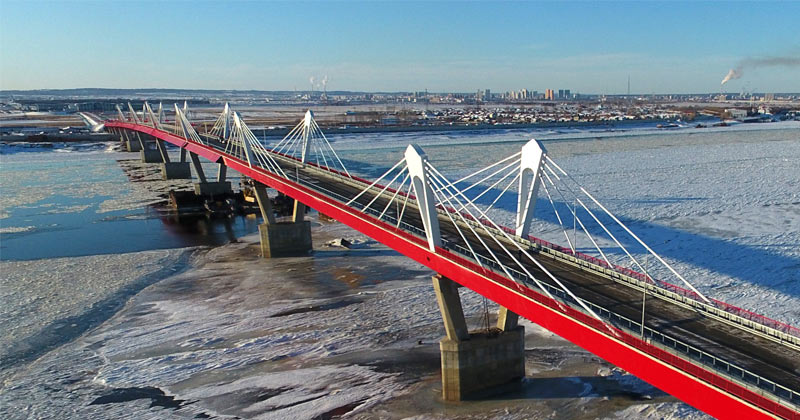 The construction of a bridge over the Amur River to link Russia and neighboring China has been completed in the Far East. The historic road is first of its kind between the two states and is set to boost economic ties.

The bridge links the cities Heihe in northern China and Russia’s far eastern city of Blagoveshchensk located on the opposite banks of the Amur River, also known as Heilongjiang by the Chinese. The bridge is more than 1km long (0.6 miles) and is a part of key 19.9km (12.4 miles) two-lane highway project.

The ambitious $300-million construction project was started in December 2016 and the two parts of the massive cable-braced bridge were joined together at the end of May. The new milestone was reached on Friday, when local authorities announced the end of the construction works paving the way for the opening, scheduled for April 2020.

“The bridge has a strategic importance for us. It is a very serious perspective for our region,” the governor of the Amur Region, Vasily Orlov, said during a special ceremony marking completion of the project.

The harsh weather conditions of the frigid region have been hampering cross-border trade for years, but the ambitious project is set to solve this problem. After the route becomes operational, cargo volume could see an 8-fold increase to 4 million tons, according to Alexander Kozlov, the Russian Minister for the Development of the Far East.

The new bridge should also boost tourism, increasing the tourist flow from China to 2 million. However, initially tourists won’t be able to use the road as it will only be available to cargo trucks. It will take another year and a half to build a crossing point allowing passenger transport, including tourist buses, to cross the bridge.

However, tourists could be offered a more convenient and an even cheaper way to get to the other side, according to Kozlov, as Russia is also building a cableway across the Amur River.