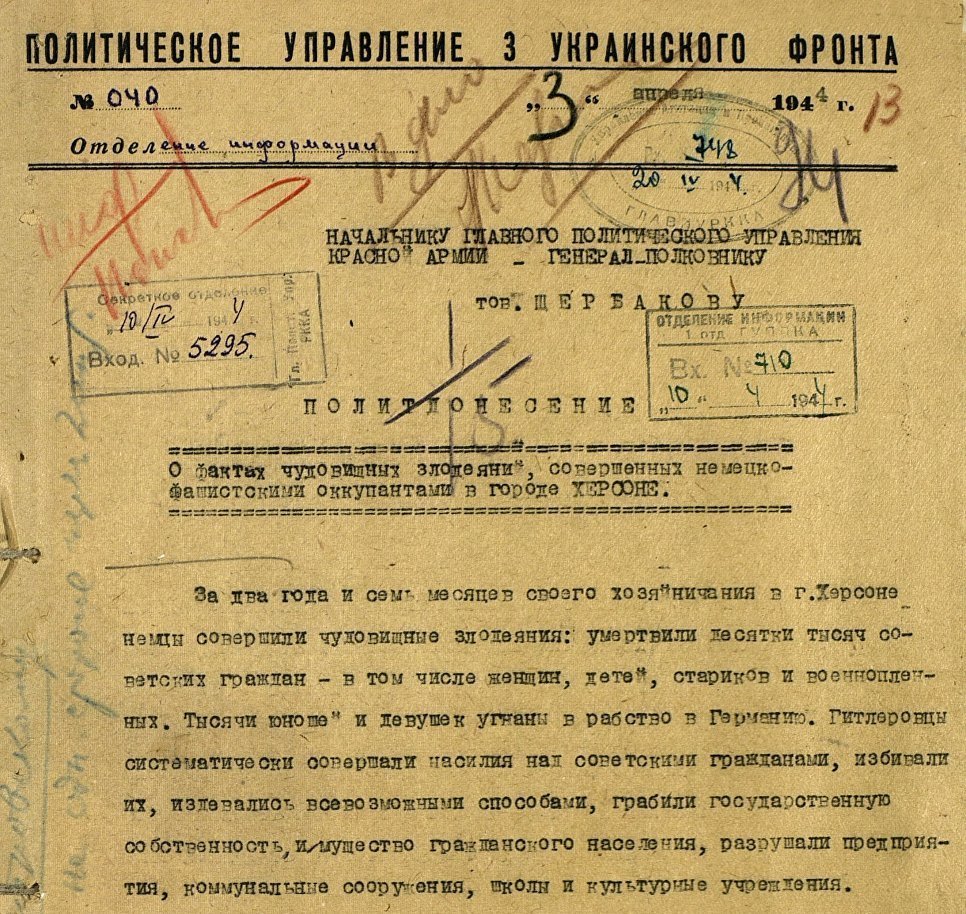 The Russian Ministry of Defense has released a unique archive of documents detailing the atrocities and horrifying cruelty perpetrated by the Nazis during their occupation of the city of Kherson, Ukraine during World War II.

The documents, published on the Ministry’s website this week, feature a report by Lieutenant-General Mikhail Rudkov, the head of the political department of the Third Ukrainian Front, dated April 3, 1944. The report lays out in detail the Nazi occupation forces’ cruelty, including their torture and execution of tens of thousands of civilians, the looting, plundering and destruction of city property, and their attempts to impose a new political and ideological order in the occupied territory.

The document is accompanied by a forensic medical examination report, conducted after the exhumation of the bodies from mass graves seven kilometers outside the city.

The preface to Rudkov’s report reads: “In the two years and seven months of its control of the city of Kherson, the Germans committed monstrous crimes: murdering tens of thousands of Soviet citizens, including women, children, the elderly and prisoners of war. Thousands of youth were taken away into slavery in Germany. The Nazis conducted a systematic campaign of violence against Soviet citizens, beating, brutalizing and victimizing them in all possible ways, stealing state property and the belongings of the civilian population, destroying factories, public facilities, schools and cultural facilities.”

Citing eyewitness reports, other testimony and estimates by local officials, the secret document details the cruelty inflicted by the Nazis against Ukrainians, Russians, Jews, Gypsies, and other groups, such as the mentally disabled. The Gestapo secret police alone are estimated to have killed up to 17,000 people, stepping up their campaign as the Soviet army came close to liberating the city.

The report also covers the special cruelty reserved for Soviet prisoners of war, who numbered in the hundreds of thousands following the surprise invasion in 1941. Rudkov details how in Kherson region, POWs were left to starve to death in camps, and subjected to torture and summary execution. The report reads: “From cold, hunger, abuse and infection (including dysentery and typhus), up to a hundred POWs would die per day.”

The report details how over 15,000 people from the city and the surrounding area, mostly children and teenagers, were forcibly rounded up and taken from their homes and sent to work camps in Germany in cattle wagons.

Rudkov also focuses on the Nazi plunder of Kherson’s industrial and agricultural potential (much of it built up just a decade earlier during the difficult and taxing industrialization campaign). The officer documents how in the city’s center, the Nazis took control of hundreds of houses and apartment buildings, government offices, stores, schools, and cultural centers. “The city’s outskirts were particularly hard hit: here the Germans burned or destroyed over 600 houses,” the report noted.

The formerly classified report also covers the Nazis’ targeting of schools, and institutions of higher learning. It calculates that in the course of the occupation, over three quarters of secondary schools were closed. 75,000 books from the library of the pedagogic institute were burned, with another 225,000 books from other libraries and institutes also destroyed. Prior to their expulsion, the Nazis looted Kherson’s Historical-Archeological Museum, known before the war to have contained the most impressive collection of artifacts in southern Ukraine.

Rudkov writes that occupation forces banned Russian-language schools, notwithstanding the strong presence of Russian in the city. In the remaining Ukrainian-language schools, only maths, handicrafts, Ukrainian and German language studies were permitted. History, geography, sciences and other subjects were simply banned.

“The Hitlerites worked to liquidate Ukrainian national culture,” the report stresses, with city movie theaters showing only German films and Goebbels’ propaganda. The region’s churches were also looted, their icons, silver and gold crosses, other artifacts transferred to Germany.

The documents also make clear that as the war bore on and their successes were rolled back, the Nazis began a campaign to try to cover up their crimes in the occupied territories. This is shown by a directive by Wehrmacht High Command obtained and translated into Russian from June 15, 1944, showing a ‘categorical ban’ on photographing executions, along with an order to carry out the killings without witnesses.

Commenting on the significance of these documents, the Ministry of Defense explained that they have “acquired a special relevance today, in light of attempts by various political forces both in our country and abroad to rewrite the history of World War II and to impose a new version on the world – to reshape history for political purposes.”

The Ministry recalled that the Great Patriotic War (the Russian term for the Soviet-Nazi German war of 1941-1945) “brought the peoples of the Soviet Union not only huge losses on the front, but took the lives of millions of civilians. Without regard for any norms of international law or civilized relations, the fascist armies, declaring the total extermination of ‘sub-humans’ (the Nazi term for the Slavic peoples) methodically organized a campaign of brutal terror in the territories they occupied.”

Kherson, a region in southern Ukraine situated just north of Crimea, was occupied by Nazi forces in the summer of 1941, and suffered nearly three years of occupation before being liberated by Soviet troops in March 1944.

An estimated 6 million Ukrainians fought in the ranks of the Red Army during the Second World War. They fought alongside Russians, Belarusians, Kazakhs, Tajiks, Georgians, Armenians, Azerbaijanis, Jews and the dozens of other nationalities of the Soviet Union to liberate the country, and Europe, from the Nazi menace.

Unfortunately, over the last several years, in their effort to distance themselves from Russia, Ukrainian authorities have engaged in a systematic campaign to try to cast the 100,000 or so fighters from the Ukrainian Insurgent Army (UPA), a militia force that collaborated with the Nazis, as heroes. Most Russians, and many Ukrainians, consider this to be a shameful attempt to rewrite history, particularly because the vast majority of Ukrainians fought against the Nazis, and the UPA, during the war.