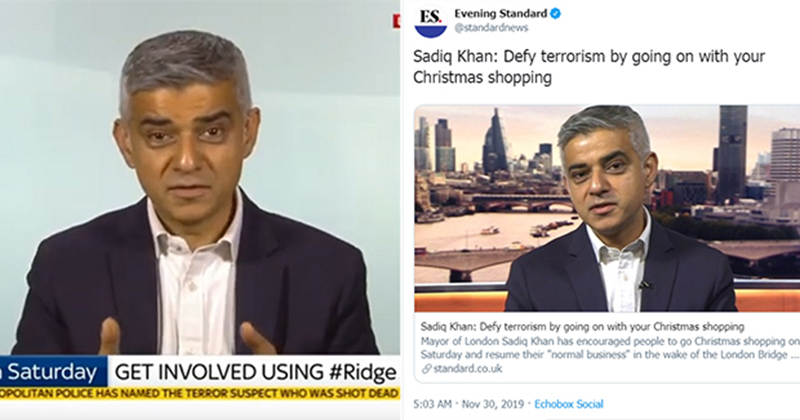 London mayor Sadiq Khan responded to the London Bridge attack by claiming terrorists hate us for our diversity and urging folks to go shopping.

Khan said during an interview with Sky News on Saturday:

“Well firstly we have got to remind ourselves why we are target. Why does a man like this attack us? Because he hates the fact that we’re pluralistic, we don’t just tolerate each other but we respect, celebrate and embrace each other. He hates the fact that we’ve got Muslims, Christians, Jews, rich, poor, Sikh, Buddhist, members of all faiths and those that aren’t, members of the LGBT+ community are all getting on together really well, they hate that and what we’ve got to do is remind ourselves that we’re a beacon for the rest of the world. We celebrate our civil liberties, we have human rights and they hate that and it’s really important that we are confident that we have the right posture and body language to show, do you know what, we’re not going to allow you to get us down.”

Khan’s statements were remarkably similar to those of George W. Bush after 9/11 when he said the terrorists hate us for our “freedoms” and urged Americans to go shopping.

Sadiq Khan: Defy terrorism by going on with your Christmas shopping https://t.co/fFPwpkFsiX

From the Evening Standard, “Sadiq Khan: Defy terrorism by going on with your Christmas shopping”:

The mayor said: “What we shouldn’t allow to happen is for our way of life to be disrupted by this terrorist – that’s what they want.

“What I’m really proud about is, last night, outside the cordoned area in London Bridge and in parts of central London, there were people enjoying bars, enjoying restaurants, going about their normal business.”

The mayor added: “I’m hoping people today come to London to shop for Christmas, to go about their normal business […]”

As this was all happening, 22-year-old Louis Duxbury on Friday was sentenced to 18 months in prison for ranting against Muslims in the wake of another deadly terrorist attack in Britain in 2017.

What is the message we’re getting here?

Ignore terrorism and the ripping apart of our social fabric and just go out and buy mass produced consumer goods.

This is the religion of prog-globalism.