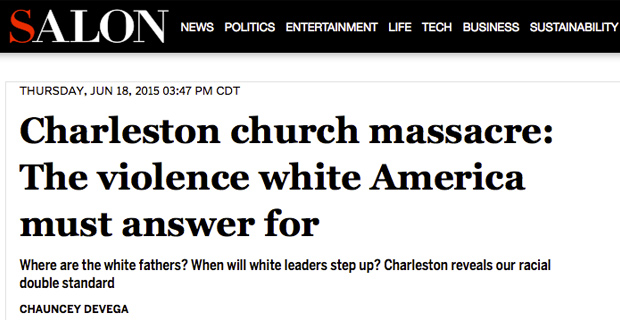 Following the Boston Marathon Bombing in 2013, leftist media outlet Salon penned an article demanding that Americans not judge an entire group of people based on the actions of a few.

Entitled “I am not the Tsarnaevs,” Salon writer Wajahat Ali stated that the “Tsarnaev brothers’ criminal and perverse actions” did not speak for him or “the overwhelming majority of Muslims.”

As the country struggled to comprehend the cold-blooded massacre of 9 black Americans this week at a South Carolina church, Salon, revealing its usual hypocrisy, demanded the complete opposite.

In an article entitled “Charleston church massacre: The violence white America must answer for,” writer Chauncey DeVega suggests that all whites must collectively absorb the blame.

“In the aftermath of recurring mass shooting events, and right-wing domestic terrorism, it is essential that they [white Americans] start to practice such acts of introspection in the interest of the Common Good,” DeVega writes.

Never blame an entire race or religion for the actions of a few (unless you are @Salon) via @SchaffnerKevin pic.twitter.com/vB12vcISiV

Salon’s clear bias highlights the typical mentality of the far left, where the dogma of political correctness always supersedes morals, facts and logic.

Due to inflamed rhetoric propagated by such outlets, community leaders, including Charleston pastor Eric Hallback Sr. of The Rock Faith Center, now fear riots in the city.

“I pray our country doesn’t go into a riot or a bad place,” Hallback said. “To show we have to deal with it ourselves as a church as a body of believers, let God handle it. We need to stand our ground and stand on the truth and not allow this to cause us to come out of character that’s my biggest prayer, is that we don’t come out of character.”

Pushing the fabricated notion that blacks are being hunted down in record numbers by whites, leftists only serve to create a racial divide between all Americans.

As noted by Infowars writer Paul Joseph Watson, such false claims are leading to further unrest, crippling the ability of Americans to rationally discuss race relations in the 21st century.