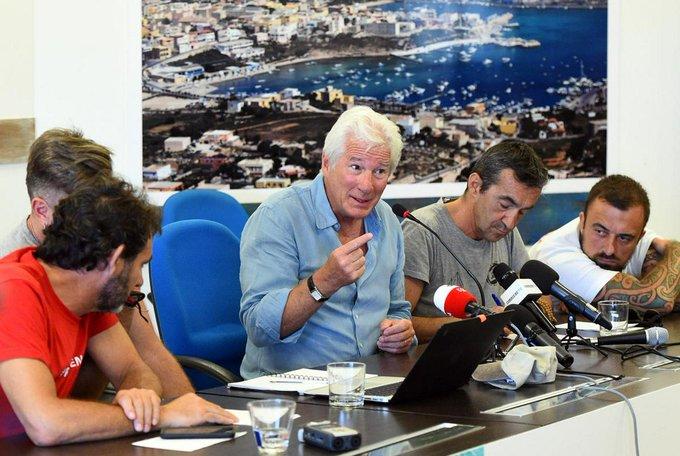 Italian Prime Minister Matteo Salvini hit back at Richard Gere, suggesting that the actor fly 160 migrants stranded off the Italian coast back to Hollywood on his “private jet.”

Gere, appearing at a press conference for NGO Open Arms on the Italian island of Lampedusa, implored Italy to allow the ship to dock – a request Salvini has staunchly refused for weeks, according to Bloomberg.

“As the generous millionaire airs his demands about the fate of the Open Arms immigrants, we thank him: he will be able to bring everyone in his private jet to Hollywood and keep them in his villas,” said Salvini in response to Gere’s appearance.

“Surely, he is impressed by the decisions that have been taken to bolster police and counter smugglers and criminals. Italy had been waiting for those measures for years,” he added.

Salvini has made a flagship policy of refusing to allow the migrant vessels, coming mostly from nearby North Africa, to enter Italian waters. Now in the first steps of a months-long electoral campaign, Salvini is likely to double down on the anti-immigrant rhetoric that’s made him Italy’s most popular politician for now. –Bloomberg

Open Arms founder Oscar Camps said during the presser that the migrants – who were rescued in international waters – are entitled to safe harbor and to apply for asylum in Europe. They are currently on a NGO vessel floating in international waters near the island – located around half-way between the southern Italian coast and Tunisia.

The 69-year-old Gere was filmed aboard the Open Arms vessel on Friday giving migrants snacks and water, before making a short speech.

“The most important thing,” said Gere – speaking from the boat, is for the migrants “to be able to get to a free port, to be able to get off the boats and get on land and start a new life.”

Jailtime for Gere! Take them in yourself! #QAnon https://t.co/fWO5EIS3y7

Malta, meanwhile, says they will accept 39 of the migrants picked up Friday, however other European governments have thus far refused to allow the remainder to disembark.

Salvini has dubbed the request to disembark a “provocation” that disregards the lives of the migrants and called on Spain, the country where the boat is registered, to take them in. Spanish authorities have refused, insisting it must disembark at the nearest port.

The Italian interior minister has also threatened to seize the ship, using newly acquired powers granted him by parliament just days before he pulled the plug on the shaky coalition with a populist ally and sought to force new elections. –Bloomberg

According to Camps, “No decree or fine will stop us from protecting people at sea.”