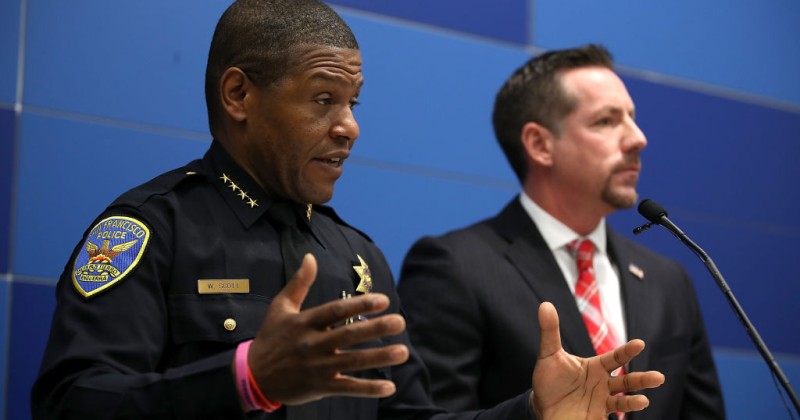 San Francisco Chief of Police William Scott announced Wednesday that the SFPD will no longer be releasing most mug shots as he claims “research” suggests they create an “illusory correlation” associating “black and brown men” with criminal behavior.

“This policy emerges from compelling research suggesting that the widespread publication of police booking photos in the news and on social media creates an illusory correlation for viewers that fosters racial bias and vastly overstates the propensity of black and brown men to engage in criminal behavior,” Scott said in a statement shared on Twitter.

“By implementing this groundbreaking new policy today, SFPD is taking a stand that walks the walk on implicit bias while affirming a core principle of procedural justice — that those booked on suspicion of a crime are nonetheless presumed innocent of it. I’m grateful for the expertise of our academic partners, Dr. Jack Glaser from the University of California Berkeley’s Goldman School of Public Policy and Dr. Jennifer L. Eberhardt of Stanford University, for their guidance in developing our policy. I am also thankful to the members of our San Francisco Police Commission, Public Defender Manohar Raju, District Attorney Chesa Boudin, Department of Police Accountability Director Paul Henderson, community members and news media professionals who also gave helpful input in this collaborative process.”

“San Francisco’s is the first police department in the nation, to my knowledge, to implement a policy to halt the release of most booking photos in order to avoid the problems they risk creating by fostering implicit bias,” said Dr. Jack Glaser, a professor at the University of California Berkeley’s Goldman School of Public Policy and author of the book, Suspect Race — Causes & Consequences of Racial Profiling. “Kudos to SFPD Chief Bill Scott for his commitment to a reform that’s on the leading edge of 21st century policing and which holds the promise of being a national model for other police departments to follow.”

The FBI’s crime stats are all just in your mind!