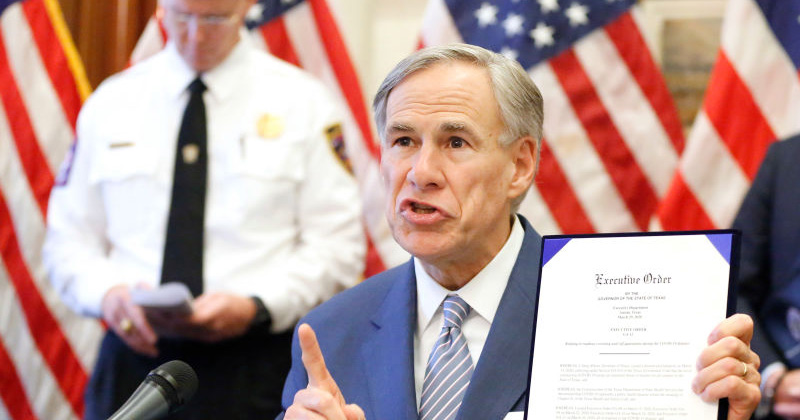 In another example of how establishment Republicans are working lockstep with Democrats to crush the economy, Texas Gov. Abbott admitted the Covid-19 death rate in Texas is relatively low, yet wants to keep businesses restricted or outright shut down anyway.

In a tweet to ex-Attorney General Eric Holder, Abbott admitted that Texas has “the lowest death rate of the 27 most affected states” and that California is spiking in cases “even though it shut down harder & longer than Texas” – yet keep in mind that Abbott practically followed California’s lead in pushing a SECOND lockdown of bars and reduced capacities of restaurants, not to mention the aggravation of mask ordinances which also curtail retail shopping.

Eric—why is Texas tied for the lowest death rate of the 27 most affected states?

Why have more Texans recovered from COVID than any other state & twice the number of New Yorkers?

Why is CA spiking more than TX even though it shut down harder & longer than TX? https://t.co/CsmUSpNPEr

And while Abbott is cheerleading the low death rate of Covid-19, he doesn’t seem to be concerned about the upcoming suicides resulting from Texans losing their homes and livelihoods because he decided by executive fiat (i.e. dictatorially) to curtail the economy a second time.

He also doesn’t seem to be concerned that he’s acting a lot like Antonio López de Santa Anna, whose centralist rule by executive fiat  helped spur the Texas Revolution.

For one thing, the Texas legislature hasn’t been called into special session to deal with Covid-19, which has given Abbott the opportunity to act unilaterally while practically ignoring that the spike in cases coincides with a spike in coronavirus testing, not to mention recent mass protests.

“On [a] phone call with legislators (updating us on COVID-19), Abbott FAILED TO MENTION that his office was literally working and releasing his newest mask mandate order,” said state representative Jonathan Stickland (R-Beford). “What a piece of crap! The man thinks he is KING!”

The optics are not looking good for Abbott as more truth about Covid-19 emerges, especially as many bars and restaurants will close permanently due to his second shutdown order.

“When the present crisis began, perhaps not enough was known about the virus to second-guess the worst-case projections motivating the lockdowns,” Texas Supreme Court Justice James D. Blacklock wrote. “As more becomes known about the threat and about the less restrictive, more targeted ways to respond to it, continued burdens on constitutional liberties may not survive judicial scrutiny.”