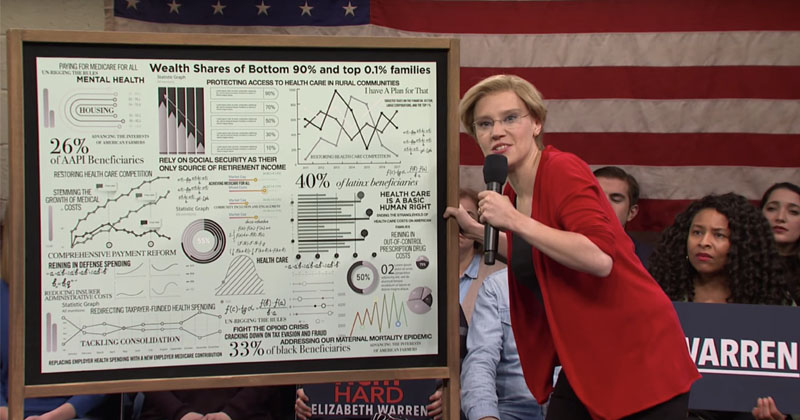 Saturday Night Live mocked Democratic presidential candidate Sen. Elizabeth Warren this weekend over the massive cost of her “Medicare for All” healthcare plan, following her announcement that the socialist proposal would cost $52 trillion over the next decade.

“Hello, it is good to be here. Look at me, I’m in my natural habitat, a public school on a weekend,” McKinnon’s Warren said. “I just housed a Nature Valley bar in the hallway, so I am jacked up and ready to pop off.”

McKinnon’s Warren explained how her “Medicare for All” plan would actually work.

“Hi, I work for Kamala Harris’ campaign, but I’m still undecided,” one person in the crowd asked. “I’d like to know why did it take so long for you to release your plan to pay for Medicare For All?”

“When Bernie [Sanders] was talking Medicare For All, everybody was like, ‘oh, cool,’ and then they turned to me and was like, ‘fix it, mom!’” Warren responded.

“And I’ll do it because that’s what moms do. You know, with dad you eat birthday cake for breakfast and then go to Six Flags, and then I hold your hand while you throw up in my purse.”

Warren then answered a question about how much her plan would cost.

“We’re talking trillions,” she said. “When the numbers are this big they’re just pretend. There ain’t no Scrooge McDuck vault. You ready to get red-pilled? Money doesn’t exist.”

Currently, Warren is in second place behind Joe Biden in the polls at 19.6% and is maintaining a slight lead over socialist 2020 candidate Sen. Bernie Sanders.

Watch Alex Jones break down Warren’s Medicare for All fraud below:

Straight off of Elizabeth Warren’s presidential campaign website is a savings calculator that will tell you how much money you will save annually with her new healthcare plan. Alex Jones puts it to the reality test.