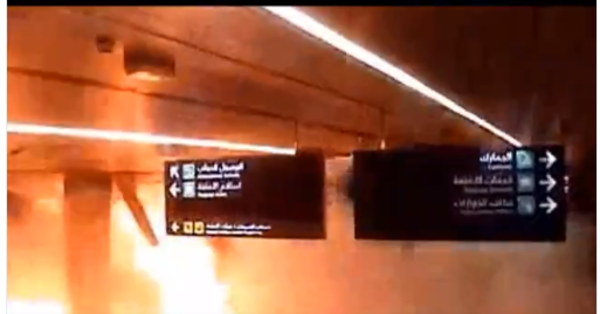 Amid fast escalating tensions in the Persian Gulf surrounding Thursday morning’s mysterious “attacks” on two tankers which US officials are already blaming on Iran, Saudi Arabia has released CCTV footage of this week’s previously reported Yemeni Houthi missile attack on a civilian airport terminal in the southern part of the kingdom.

Just with Thursday’s tanker incident, Saudi defense leaders are pointing the finger at Iran for ordering its on-the-ground Shia proxy rebel forces in Yemen to conduct the prior attack as well.

The Houthi airport attack now takes on even bigger significance given Thursday morning’s dramatic tanker incident. Likely it will be used by Saudi and US officials to build a case against Iran, ultimately to pin responsibility for the tanker incident on Tehran’s leadership as well.

The shocking CCTV footage from Abha International Airport was published by the Saudi/UAE outlet Al-Arabiya.

The Yemeni rebel group said that its missile force had launched a “cruise missile” at the strategic airport, which has a large military part.

A spokesman for the group said that “advanced U.S. air-defense systems” deployed inside the airport were not able to intercept the missile.

“A cruise missile targeted the control tower directly, which resulted in its destruction,” Brig. Gen. Yahya Sari, a spokesman for the Houthis, said in a short press release.

Contrary to the Houthis’ claims, the Saudi-led coalition said that the missile hit the arrival hall in the airport injuring 26 civilians, including three women and two children.

Most of the injured civilians were treated on spot. However, 8 were transported to nearby hospitals.

“The Iran-backed Houthi terrorist militia, through its media, claimed full responsibility for this terrorist act using a cruise missile – as they claim- which constitutes a clear recognition and full responsibility for the targeting of civilians and civilian places that are subject to special protection under international humanitarian law, this may amount to a war crime,” a spokesman for the Saudi-led coalition, Col. Turki al-Malki, said in an official statement.

Col. al-Malki said that the coalition’s experts are investigating the type of missile used in the attack on Abha International Airport.

Prior footage of Houthi ballistic missile launches on Saudi Arabia:

#BREAKING: It is now confirmed that the #IRGC's #Houthi rebels have used Soumar cruise missile (Iranian copy of #Russian Kh-55 missile) to target the #Abha Intl airport in S. #SaudiArabia today. Back on 3rd Dec. 2017, they unsuccessfully launched a Soumar at #AbuDhabi, #UAE. 👇👇 pic.twitter.com/HdKyCUjcBu

The Houthis have a track record of using precision-guided weapons. In 2017, the Iranian-backed group launched what is suspected to be an Iranian Soumar cruise missile at the Barakah nuclear power plant in the UAE.