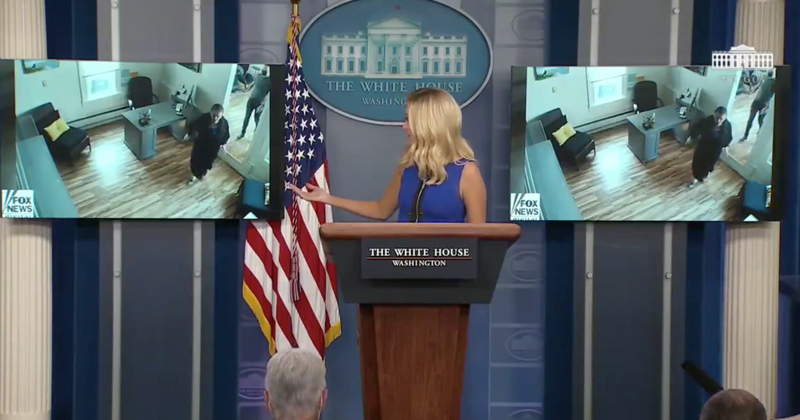 “Good afternoon everyone. Two briefings ago I asked, ‘Where is Nancy Pelosi?’ Today I can announce we have found Nancy Pelosi. As you can see we found Nancy Pelosi going into her hair salon. We will be playing the video on loop for all of you to see during the duration of this introduction.”

“Nancy Pelosi was not in the halls of Congress when I asked where she was. She was not working in good faith to make a deal for the American people.”

“Nope, Nancy Pelosi was found in San Francisco at a hair salon where she was indoors, even though salons in California are not only open for outdoor service. Apparently the rules do not apply to speaker Nancy Pelosi. She wants small businesses to stay shut down, but only reopen for her convenience. Do as I say, not as I do, says Nancy Pelosi.”

On Tuesday, the San Francisco salon owner released footage of Pelosi’s visit to her salon, showing the House Speaker attending a hair appointment mask-less, just one day ahead of salons being allowed to re-open.

On Wednesday, Pelosi attacked the salon owner claiming the hair appointment was a “setup” to make her look bad.

“It was a setup” pic.twitter.com/cOlsmdq2pk

President Trump weighed in on Thursday, slamming Pelosi for being so “easily set up.”

Crazy Nancy Pelosi said she was “set up” by the beauty parlor owner when she improperly had the salon opened (and didn’t wear a MASK!). Does anyone want a Speaker of the House who can be so easily SET UP?