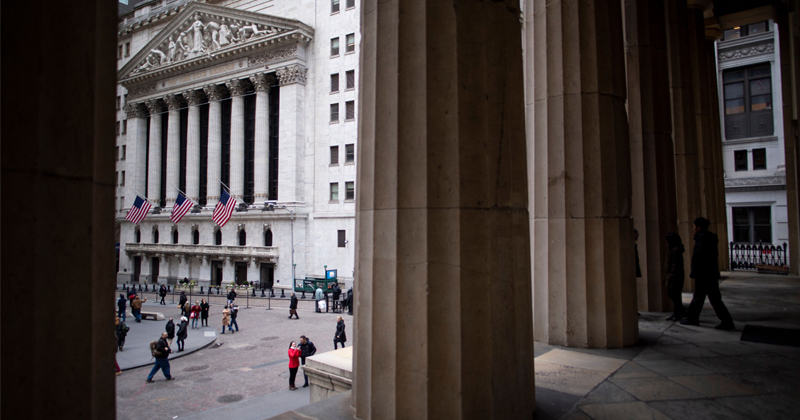 US stock markets had a strong week last week. The Dow Jones capped it off gaining more than 300 points on Friday.

Optimism about a trade deal with China along with increasing expectations that the Federal Reserve will slow the pace of interest rate hikes buoyed the markets.

This has led many pundits to declare that the correction is over. Some have even declared its a new bull market. In his latest podcast, Peter Schiff said that’s not what’s happening at all. What we’re seeing is a typical bear market correction and a recession is right around the corner.

All day Friday, pundits on CNBC emphasized that the Dow has risen out of “correction” territory, meaning it is no longer 10% below its highs. Peter took issue with this analysis.

“First of all, we didn’t enter a correction. We entered a bear market. Now, bear markets have corrections too. They’re called rallies. Except the people and CNBC don’t get that. They think the only correction is a move down in a bull market.”

Peter said this correction is actually helping this bear market fall a “slope of hope.”

So, what is driving this bear market correction? Just like Peter predicted – the Federal Reserve.

“As I’ve been saying, I began forecasting, even before the first rate hike in December of 2015, that if the Federal Reserve ever tried to normalize interest rates, it would never succeed. It would never be able to get rates back to normal because somewhere along the way they would tip the stock market into a bear market, cause a recession, and the Fed would back off. And that’s exactly what happened. The minute the stock market went into a bear market in the fourth quarter of last year, by early this year, everybody did an about-face, and all of a sudden, there are no more rate hikes, no more autopilot. They’re just, you know, being patient.”

We’ve been reporting on the Powell Put, but the Fed chair isn’t alone in his dovishness. In fact, San Francisco Fed President Mary Daly said rate hikes are “on pause” last week, even though she sees no sign of a recession.

Peter said they if they are pausing now, what will they do when they realize a recession really is staring them in the face?

“Of course, stock market investors are clueless about that. They’re just having a party because the Powell Put is back on the table. And they think simply because the Federal Reserve is no longer hiking rates that they no longer have to worry about the Fed pushing the economy into a recession. Well, it’s too late for that. The rate hikes of the past have already guaranteed that the economy is headed for recession. It doesn’t matter whether they continue to raise rates in the future. The recession is a done deal. It’s just now you have that calm between the storm while investors are still clueless and haven’t yet connected those, what should be, very obvious dots.”

The bottom line is this economy was built on zero percent interest rates.

“Two-and-a-quarter percent is much too high. That’s not enough stimulus. Even though that’s very low, when you’re used to zero and now you’ve got two-and-a-quarter, that’s not low enough.”

Peter talked about the possible resolution of the trade war. He said markets can rally on the anticipation of a truce, but it will likely end up “buy the rumor sell the fact.” He said the trade deal will ultimately be a nothing-burger.

Peter also talked about the recent news that China plans to buy billions of dollars of US products to eliminate the trade deficit, and took a TV analyst to task for claiming that gold as “not practical uses.”

Report detailing what’s ahead as the Federal Reserve is crashing the debt & real estate bubble it created.